3 February 2019: Here we are in February already! What happened to January? Seems like just last week it was Autumn with cool crisp days and bright skies! And then the reality of last week with the Arctic Vortex descending on North America vanished that image in a flash!
Most people probably think the greatest maritime tragedy - in terms of lives lost - was the 15th April 1912 sinking of the Titanic following her run in with the iceberg. Yes, that was dreadful and 1600 men women and children died. But trumping that horrible tragedy was the sinking of a German cruise liner carrying civilians in the Baltic on 30 January 1945. From Cathryn Prince's 2013 book, Death in the Baltic, we offer a [somewhat edited] glimpse at that horrific event.


On Jan. 30, 1945, history’s deadliest maritime disaster in peace or war occurred in the Baltic Sea. An estimated 10,000 people perished in the little-known incident that saw a Soviet submarine torpedo the German cruise ship Wilhelm Gustloff off Leba, Poland.

A Ship Named Gustloff
When Adolf Hitler launched the Wilhelm Gustloff from the seaside city of Hamburg on May 5, 1937, hundreds of German workers and Nazi party officials gathered to witness the spectacle.
Flags and swastika banners festooned the quay and arms raised in the notorious Heil Hitler salute as the ship sailed forth showing an uneasy world the full industrial might of Nazi Germany.
The 200-foot long, 25,000-ton vessel was named for Wilhelm Gustloff, the late head of the Swiss Nazi Party who was gunned down a year earlier by a Yugoslavian Jew named David Frankfurter. The Third Reich chose to pay tribute to one of its foremost leaders in the form of the 25-million Reichsmarks flagship for Nazi Germany’s Kraft durch Freude (KdF)  or “Strength Through Joy Fleet”. 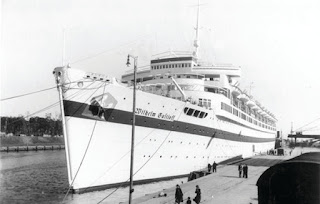 The KdF was a subsidiary of the Deutsche Arbeitsfront or German Labor Front. Nazi trade union chief Robert Ley, who also had a liner named for him, helped establish the KdF as a means to provide amenities to the German working class and their families.
The Wilhelm Gustloff, like the Robert Ley and other liners in the fleet, was equipped with 22 lifeboats and featured 12 watertight transverse bulkheads. These measures were supposed to make the ship “absolutely secure.” (After the loss of the Titanic in 1912, no ship builder dared call any vessel, especially a cruise liner, “unsinkable.”)

Human Cargo
By January 1945, civilians living in Eastern Prussia were growing increasingly frantic. The Red Army was coming and few expected the invaders to offer any quarter to Germans. Fearing the Russian onslaught, Nazi admiral Karl Dönitz commanded his vessels to evacuated as many civilians and military personnel from the region as possible. It would prove to be one of the Kriegsmarine final major efforts of the war. Virtually every available surface ship in the German navy participated in the mission, dubbed Operation Hannibal. Even the Reich’s merchant fleet joined in the boat lift.

The Wilhelm Gustloff was just one of 800 vessels, from mighty cruise liners down to small fishing boats, assigned to carry passengers from the Gulf of Danzig that January. Eventually, more than two million civilians were taken off the Courland, East and West Prussia, Pomerania and parts of Mecklenburg between Jan. 23 and the end of the war in May. Aside from the large ports – Danzig, Gotenhafen, Königsberg, Pillau – throngs of civilians tried their luck from smaller ports and fishing villages.
On Jan. 30, more than 10,000 refugees had been crammed aboard Wilhelm Gustloff in Gotenhafen. They hoped the ship would take them to safety in Kiel, a German Naval Base across the Baltic Sea. Shortly after midday, the liner put to sea.

Surprise Attack
At around 8 p.m. that same evening, Hitler delivered a speech commemorating the 12th anniversary of the Nazi party’s rise to power. Radio stations throughout the Reich broadcast the event. On board the Wilhelm Gustloff, crewmen transmitted the speech live over the ship-wide PA system.
A short distance away, the commander of the Russian submarine S-13 had spotted the slow-moving liner and moved in for the kill. 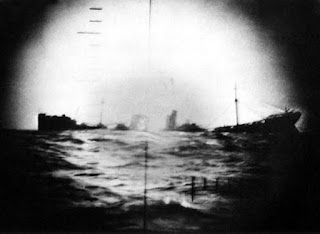 At 9 p.m. local time, just as the Fuhrer reached the end of his fevered address, Captain Marinesko ordered the S-13 to fire all four of her tubes at the German vessel. One of the torpedoes became lodged in the launching tube, its primer fully armed. The slightest jolt threatened to detonate the warhead, destroying the submarine. The crew gingerly disarmed the weapon, which had marked with the words “For Stalin”.

The other three torpedoes found their target. The first punched through the bow. The second blasted a hole near the swimming pool where 373 members of the Women’s Naval Auxiliary had taken refuge — most of the young women died instantly. The third torpedo struck the Wilhelm Gustloff amidships, near the engine room. The blast disabled the engines and cut the ship’s power. It also extinguished the lights and silenced the vessel’s communications system.
Over the next 90 minutes, the ship sank.

A 1996 Russian postage stamp commemorating the S-13. The sub’s captain, Alexander Ivanovich Marinesko, was posthumously made a hero of the Soviet Union in 1990 for his role in the sinking of the Wilhelm Gustloff.

Death Toll
Today, the Wilhelm Gustloff lies on the sandy bottom of the Baltic Sea. Although the tally of dead and living wouldn’t come until years after the war, it’s now known that fewer than 1,000 survived. Almost six times as many men, women and children perished in the attack than were lost during the April 15, 1912 sinking of the Titanic. And so on Jan. 30, 1945 the Wilhelm Gustloff became the worst maritime disaster in history.
~~~~~~~~~~~~~~~~

Truly a somber note, with so much on so many levels, to turn one's stomach....


Posted by Maritime Maunder at 2:33 PM