12 JULY 2018: Before we get into today's subject, let me acknowledge and thank our 75,000 readers world-wide who have followed Maritime Maunder over the almost four years since we started. Our readers cover a vast area of the globe - ranging from Canada to Argentina and from Russia to Australia. We have not found any readers yet in Asia, but maybe someday. So thank you to all have have discovered our blog and checked the posts from time to time. We are grateful and humbled by your acceptance and loyalty. Now on to today's subject.

In 1781, the American Revolution was winding down and the action had moved to the southern states: the Carolina's and Virginia specifically. Washington's army was engaged with Lord Cornwallis's seasoned veterans in Yorktown Virginia and the American siege was taking its toll on the British. They needed resupply and more troops. If resupply became impossible, evacuation was the next choice. Since Washington's army had cut off a land retreat, the only way out for the British was by water, specifically, the York River. Admiral Graves was sent, with a fleet, to accomplish this.

The American's ally, France, sought to intervene and French Adm. DeGrasse sailed his fleet up from the West Indies to preclude Graves from succeeding.


The Battle of the Chesapeake, also known as the Battle of the Virginia Capes or simply the Battle of the Capes, ensued on 5 September 1781. The combatants were a British fleet led by Rear Admiral Sir Thomas Graves and a French fleet led by Rear Admiral Francois Joseph Paul, the Comte de Grasse. The battle was strategically decisive,[1] in that it prevented the Royal Navy from reinforcing or evacuating the besieged forces of Lieutenant General Lord Cornwallis at Yorktown, Virginia. The French were able to achieve control of the sea lanes against the British and provided the Franco-American army with siege artillery and French reinforcements. These proved decisive in the Siege of Yorktown, effectively securing independence for the Thirteen Colonies.

Admiral de Grasse had the option to attack British forces in either New York or Virginia; he opted for Virginia, arriving at the Chesapeake at the end of August. Admiral Graves learned that de Grasse had sailed from the West Indies for North America and that French Admiral de Barras had also sailed from Newport, Rhode Island. He concluded that they were going to join forces at the Chesapeake. He sailed south from Sandy Hook, New Jersey, outside New York harbor, with 19 ships of the line and arrived at the mouth of the Chesapeake early on 5 September to see de Grasse's fleet already at anchor in the bay.

De Grasse hastily prepared most of his fleet for battle—24 ships of the line—and sailed out to meet him. The two-hour engagement took place after hours of maneuvering. The lines of the two fleets did not completely meet; only the forward and center sections fully engaged. 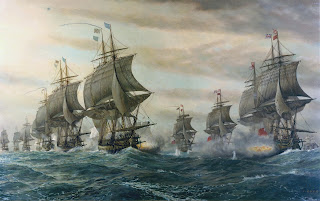 The battle was consequently fairly evenly matched, although the British suffered more casualties and ship damage, and it broke off when the sun set. The British tactics have been a subject of debate ever since.

The two fleets sailed within view of each other for several days, but de Grasse preferred to lure the British away from the bay where de Barras was expected to arrive carrying vital siege equipment. He broke away from the British on 13 September and returned to the Chesapeake, where de Barras had since arrived. Graves returned to New York to organize a larger relief effort; the relief fleet did not sail until 19 October, two days after Cornwallis surrendered.


A three-day surveying expedition by JRS Explorations, Inc., has revealed multiple promising targets previously believed to be unidentified shipwrecks from Lord Cornwallis’s defeat at the Battle of Yorktown.
The targets have the size and physical appearance consistent with confirmed wrecks in the area from Cornwallis’ scuttled fleet, which has been on the bottom of the York River since 1781.
The survey, which occurred from April 9-11, was led by renowned underwater archaeologist John Broadwater, who is vice president of JRS Explorations. 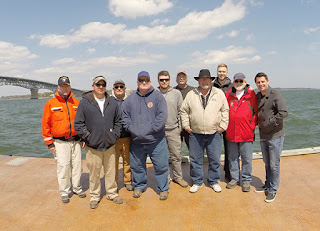 Broadwater explored the Yorktown shipwrecks in the 1980s, as well as worked on projects like the USS Monitor, Titanic, and Apollo’s Saturn V Boosters recovery. On the Titanic and Saturn V missions, Broadwater worked with James Cameron and Jeff Bezos, respectively.

Portunes International, Abbott Underwater Acoustics, InterPhase Entertainment, Precon Marine, Inc., and local volunteers all joined in on the Yorktown mission.
The team deployed a high-resolution Konsberg-Mesotech MS-1000 sector-scanning sonar, which has never been used on the Cornwallis fleet sites.
This sonar provides a 360-degree, top-down view of the sites in a level of clarity beyond what has been previously deployed in the York River.

The sonar was operated by Brian Abbott of Abbott Underwater Acoustics, and David Thompson of Portunes International. During the survey more than a dozen shipwreck sites were imaged, along with several reported sites.
“The results are amazing,” Broadwater said. “The new data will be critical in our efforts to assess the condition of the Yorktown shipwrecks and to launch a new phase of research.”

So, pretty exciting, we think. Perhaps more will be discovered and reported during the summer and we will try to keep you up to date. One good part of this story is the York River is not only relatively shallow (in other words, divable), it will be reasonably warm during the summer months. Stay tuned!

Until next time,
Fair Winds,
Old Salt
Posted by Maritime Maunder at 11:30 AM