4 July 2018: Let me begin by wishing all my American readers - wherever you are - a most joyous Independence Day! And then let me apologize for the lag in posting; I was changing computers and it took longer than I expected to get up and running. But here we are now and hopefully, will be able to get something on Maritime Maunder at least once per week! While today's post is not new news, it is certainly worthy of appearing here. So, without further ado, a celebration of Dutch female sailors - even ones who live in Australia! 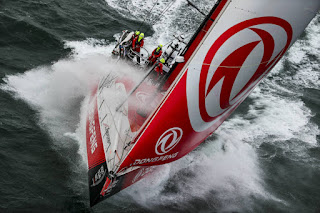 Brouwer’s Dongfeng Race Team passed Team Brunel in the final hour of the last stage from Gothenburg to The Hague on Sunday, denying her countryman Bouwe Bekking a first victory in eight attempts. 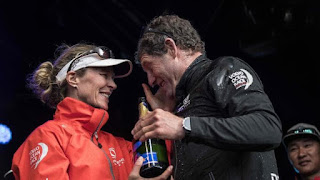 ‘It was an insane race. The main thing was to keep a cool head and we managed that,’ said Brouwer, 44, who was trimmer in a crew skippered by Frenchman Charles Caudrelier. ‘It was the most important race of my career,’ she said. ‘It’s a dream come true. We pulled it off.’ Originally from Leiden, Brouwer currently lives in Australia and has competed in the Olympics with both Dutch and Belgian crews. 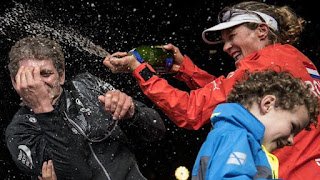 The Volvo Ocean Race lasts eight months across 11 stages spanning 45,000 miles. The rules were changed this year to encourage more mixed crews by restricting the size of all-male teams to seven. Mixed teams could have up to 10 members while all-female crews had a maximum of 11. Brunel, which finished fourth in the stage and third in the overall standings, was one of two Dutch crews participating in the nine-month race. The other crew, sponsored by AkzoNobel and skippered by Simeon Tienpont, took second place on the final stage to secure fourth place overall. Carolijn Brouwer, who lives on the NSW Central Coast with partner and multiple world sailing champion Darren Bundock and son Kyle, was part of the Dongfeng crew, which also included France’s Marie Riou and Swiss sailor Justine Mettraux, which claimed victory in the infamous round the world race held every four years on Monday.

Pretty amazing accomplishment! Congrats to all the crews; just finishing this one is an astounding feat!

Until next time,
Fair Winds,
Old Salt
Posted by Maritime Maunder at 10:10 AM