16 May 2018: Unless you have been there (as I was) or have been involved with WWII history - especially the D-Day invasion of Normandy - you probably have not heard of Slapton Sands. I had not. I learned of it while exploring the sites in France of the Normandy landings and the ensuing battles in 1944. After I crossed the Channel to England, I made certain to visit this little-known spot - a beautiful beach in Devon where the cold waters of the English Channel lap with timeless continuity, uncaring of the tragedy that occurred in April of 1944. 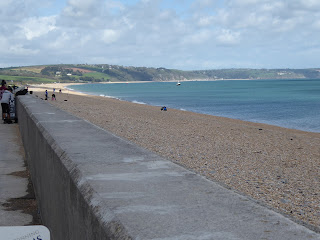 I found a reasonable write up of the event in a British publication put out by BBC in 2014. The photos accompanying this post are mine, taken a few weeks ago.


The D-Day rehearsal, code named Exercise Tiger, was a disaster on a grand scale with the loss of life greater than the actual invasion of Normandy just months later. But the true story was to remain a secret for decades to come.

Early on 28 April 1944, eight tank landing ships, full of US servicemen and military equipment, converged in Lyme Bay, off the coast of Devon, making their way towards Slapton Sands for the rehearsal.

So vital was the exercise that the commanders ordered the use of live naval and artillery ammunition to make the exercise as real as possible, to accustom the soldiers to what they were soon going to experience.

But a group of German E-Boats, alerted by heavy radio traffic in Lyme Bay, intercepted the three-mile long convoy of vessels.


The heavily-laden, slow-moving tank landing ships were easy targets for the torpedo boats which first attacked the unprotected rear of the convoy.
A series of tragic decisions - including the absence of a British Navy destroyer which was supposed to be escorting them, but had been ordered into Plymouth for repairs, and an error in radio frequencies - led to three of the tanks being hit by German torpedoes.
More loss of life was caused by lifejackets worn incorrectly by soldiers and the extreme cold of the sea which resulted in hypothermia.

The exercise that killed nearly 1,000 American servicemen was considered by US top brass to be such a disaster that they ordered a complete information blackout.
Any survivor who revealed the truth about what happened would be threatened with a court-martial.

As local resident Ken Small pounded the beach along Slapton Sands in Devon 40 years later, little did he know that the discovery of shrapnel, military buttons, bullets and pieces of military vehicles would lead to an all-consuming mission to tell the world the story that had so long been forgotten.

It was only after a local fisherman told Mr Small of an "object" some three-quarters of a mile out to sea that Mr Small's desire to find out the truth was awoken.
The former hotelier ventured out to sea in his boat with his friend and a few divers, and embedded in 60ft (18m) of water they found an American Sherman tank intact on the seabed - and that tank unraveled the story. 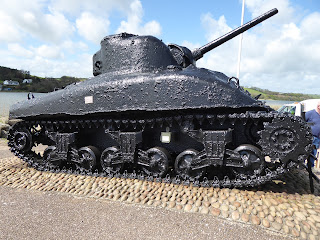 Ken Small and Laurie Bolton at the World War Two tank after it had been rescued from the sea
After negotiations over several years, Mr Small bought the vehicle from the US government for $50, finally recovering it from the sea in May 1984.
Now, 70 years on from its sinking, the tank has not only become a war memorial, but also the place to remember Mr Small.
Thanks to his efforts, the Sherman Tank Memorial Site was officially recognized by the US Congress and acknowledged by the addition of a bronze plaque. 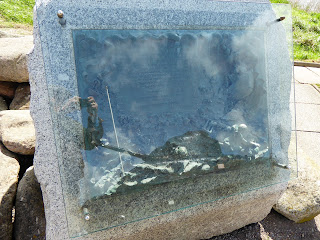 There is more to the story than we have the room to post, but that's the important stuff. Should you find it interesting, I would suggest you Google "Slapton Sands" - you will find an amazing amount of information including personal stories from participants. It is not hard to stand on the peaceful beach, stretching away almost as far as the eye can see, and picture the practice landings, tragedy, and the sacrifice those American men made for the cause of liberty. With thanks to Richard and Caroline Bawden of London and Devon who took me to this beach, ensuring I got the whole story.


Posted by Maritime Maunder at 3:35 PM