GREAT NEWS FOR CANADA AND INUIT

5 MAY 2018: Well, we are back in the office now, having returned from a short trip to England for a bit of R & R as well as some research on maritime matters. Maritime Maunder has posted numerous articles about the discovery, exploration, and controversy surrounding the wrecks of the Franklin Expedition ships, HMS Terror and Erebus. The controversy, of course, arose from the dispute over ownership, i.e. did England own the wrecks and artifacts or did Canada and the Iniut Eskimos? (The British felt that since the ships were English when they were lost, they should remain so; the Canadians, in whose waters they were found, disagreed.) Well, at last the dispute has been resolved. Mia Rabson in Canadian Press released the news:


Canada and the Inuit are now officially co-owners of the two long-lost ships from the Franklin expedition.
The deeds to HMS Erebus and HMS Terror, along with all their remaining contents, were signed over to Canada and the Inuit Heritage Trust after nearly two years of negotiations with the British government over which artifacts Britain would retain.
"This is a really extraordinary announcement," Environment Minister Catherine McKenna said during Thursday's signing ceremony with British High Commissioner Susan le Jeune D'Allegeershecque.
Britain retains ownership of 65 artifacts already discovered — both on land prior to the discovery of either shipwreck, as well as onboard Erebus itself after it was found in September 2014.

Parks Canada archeologists, guided by Inuit experts, located Erebus in relatively shallow water off the coast of King William Island in Nunavut in September 2014. HMS Terror was found in waters off a different part of the island almost exactly two years later.
In May 1845, Sir John Franklin and his crew left England on an exploratory and scientific mission through the Arctic. They disappeared sometime in 1846 after the ships became trapped in the ice, their fate and the locations of the ships becoming one of Canada's most enduring historical mysteries.
Because they were commissioned Royal Navy ships, they and their contents belonged to the U.K. under international law. But in 1997, long before the ships were actually found, Britain agreed ownership would eventually be transferred to Canada. Negotiations to do so officially began in May 2016 but hit some road blocks that necessitated high-level intervention last summer.
In her first week on the job as the new British high commissioner in Canada last August, le Jeune D'Allegeershecque had a meeting with McKenna in Ottawa.
"She asked me if I could get it sorted out and we've done it," le Jeune D'Allegeershecque said Thursday.
She said informal agreement was reached when Prime Minister Theresa May met with Prime Minister Justin Trudeau in Ottawa in September. Britain announced in October it would transfer ownership of all but a handful of artifacts to Canada and the Inuit. Still it took many more months for the final arrangements to be made, culminating Thursday in the signing ceremony at the Canadian Museum of History.
The museum is currently hosting a special exhibit on the Franklin expedition with many of the 65 artifacts Britain is keeping, including the ship's bell from HMS Erebus, the ship's wheel, some bowls and dinner plates, and even a handful of lead shot from navy guns.
Everything left on the ships — thousands of artifacts remain on board — will be co-owned by Canada and the Inuit Heritage Trust, an Inuit cultural preservation organization mandated under the Nunavut land claims agreement.
It was only with Inuit historical accounts and assistance that Parks Canada finally found the ships. Thursday's ceremony paid tribute to Louie Kamookak, who was instrumental in helping to locate the ships and who died last month of cancer.
Kamookak's work unravelling the Inuit oral histories of the shipwrecks was critical to Parks Canada ultimately being able to locate the lost ships, said Torsten Diesel, the Inuit Heritage Trust's project manager.
"Each and every one of us are only here today thanks to Louie Kamookak," said Diesel. 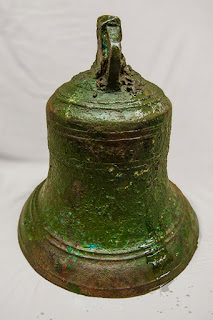 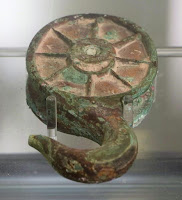 The only artifacts to be recovered so far have come from Erebus, which will be the focus for Parks Canada when a team of nine underwater archeologists return to the site this summer.

Jarred Picher, director of archaeology and history at Parks Canada, said Erebus contains the cabin once occupied by Franklin himself and is the best bet to uncover some of the biggest secrets about the fated expedition.


"We often talk about the holy grail being captains logs and journals and things like that and in Arctic conditions it is entirely possible they can be preserved," said Picher.
The sites of the two shipwrecks are national historic sites, with protected status keeping out anyone daring enough to make the dangerous journey to King William Island, which is more than 200 kilometres north of the Arctic Circle in Nunavut. 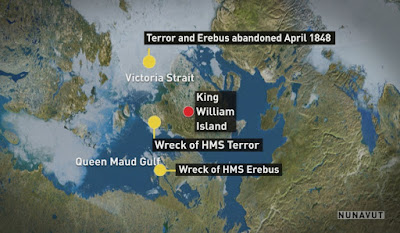 However, Picher said one day it is hoped there might be some public access to the sites. While some of the important artifacts will be removed from the ships and preserved, many of the contents will never be touched, and there is no plan to raise the ships themselves out of the water, he added.
~~~~~~~~~~~~~~~~~~~~

So - good news for Canada and the Inuit Heritage Trust. I look forward to hearing more and seeing more artifacts recovered, perhaps giving a clue as to what went awry with the expedition, causing the disaster, the loss of two ships, and the death of two entire crews.