Sea Hunter Trials1 March 2018: We posted a year or so back about this apparently revolutionary vessel called Sea Hunter. Here is an update and a pretty neat video of her operating. First, a definition of what we're talking about (courtesy of Wikipedia):

The Sea Hunter is an autonomous unmanned surface vehicle (USV) launched in 2016 as part of the DARPA Anti-Submarine Warfare Continuous Trail Unmanned Vessel (ACTUV) program.[1] It was christened 7 April 2016 in Portland, Oregon. It was built by Vigor Industrial.[2] The vessel continues the line of experimental "Sea" ships, including the Sea Shadow, Sea Fighter, and Sea Slice.[3] The Sea Hunter is classified as a Class III USV and designated the Medium Displacement Unmanned Surface Vehicle (MDUSV).[4] 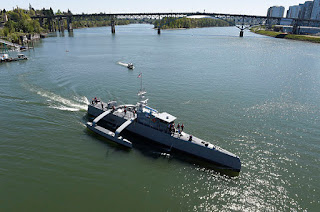 And now, the promised article:


Sea Hunter,’ a drone ship with no crew, just joined the U.S. Navy fleet
A prototype autonomous ship known as the Medium Displacement Unmanned Surface Vehicle (MDUSV) has officially been transferred to the U.S. Navy from the Defense Advanced Research Projects Agency (DARPA) after a two-year testing and evaluation program. Named “Sea Hunter,” the Office of Naval Research will continue to develop the vessel from this point forward.
Although there’s no specific timetable for when the Sea Hunter would join active naval operations, the statement from DARPA indicated that it could happen as early as this year. The anti-submarine warfare vessel could be the first of an entirely new class of warship.
“[Sea Hunter] represents a new vision of naval surface warfare that trades small numbers of very capable, high-value assets for large numbers of commoditized, simpler platforms that are more capable in the aggregate,” said Fred Kennedy of DARPA. “The U.S. military has talked about the strategic importance of replacing ‘king’ and ‘queen’ pieces on the maritime chessboard with lots of ‘pawns.’”
The collaboration between the Navy and DARPA began in 2014, with the ship designed and developed by Virginia-based defense company Leidos, and christened in April 2016. A rigorous series of open-water tests followed, including surveillance and mine counter-measures.
According to Newsweek, the ship got its name from the mission the Navy envisions for it — stalking foreign submarines at sea. It’s relatively cheap to build at $20 million, and it’s far less expensive to run than a similar manned vessel.
“This is an inflection point,” former Deputy Defense Secretary Robert Work said in an interview with Reuters in 2016. “This is the first time we’ve ever had a totally robotic, trans-oceanic-capable ship.”
“I would like to see unmanned flotillas operating in the western Pacific and the Persian Gulf within five years,” he added. Here's a video of highlights of her trials:


The Navy hopes that ships of the future will be able to stay at sea for months at a time and travel thousands of miles without any crew. The Sea Hunter is currently a surveillance platform and has no weapons onboard. It’s 127 feet long and can reach speed of 27 knots, using cameras and radar to track its location and spot other ships.
Work went on to emphasize that if robot ships like Sea Hunter were outfitted with weapons in the future, there would always be a human at the controls. “There’s no reason to be afraid of a ship like this,” he said.

And there you it, friends; the navy has solved the personnel problems by using unmanned ships!


Posted by Maritime Maunder at 8:54 AM