12 February 2018: I guess people do things like climb mountains, swim across large bodies of shark infested waters, and, yes, row a boat across the Atlantic Ocean because they are unable to resist a challenge that few would accept!
Today's post is one such story: a pair of Scottish brothers who rowed a boat from the Canary Islands to the Caribbean island of Antigua. In 55 days.

Two Scots brothers have become the fastest pair to row the Atlantic – and did part of the journey naked.
Kris and Blair Elliot completed a gruelling 3000-mile endurance race from the Canary Islands to the West Indies.
They took on the world’s most dangerous ocean in the Talisker Whisky Atlantic
Challenge in December, tackling 40ft waves and all the elements could throw at them.
Kris, 30, and Blair, 28, from Dunblane, revealed they were forced to strip off and complete parts of the journey in their birthday suits – to avoid chafing.

They took 55 days, one hour and 54 minutes to row from La Gomera in the Canary Islands – the second-smallest of the main islands in Spain’s Canaries – to Antigua.
Coping with intense sleep deprivation, seasickness and turbulent weather, the brothers had to dig deep into their energy reserves.
And they were delighted to cross the finish line and narrowly beat the Welsh boat, Team Oarstruck, by 30 minutes. 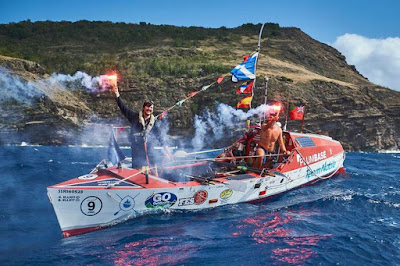 Skipper Kris said: “It was a real privilege to be able to undertake a challenge like this.
“Being brothers only made the experience even better and we had some incredible days out there. Dolphins came up to the boat and swam around us for ages – it was a moment we’ll never forget.
“We took the challenge step by step and day by day and it’s amazing to have finally arrived in Antigua.”

Speaking to the Daily Record in October, before they began the marathon challenge, firefighter Kris said: “We have to row naked most of the way across the Atlantic because the clothes will rub against our skin and cause all sorts of problems.”
The brothers rowed for Team Noble in memory of former Alloa fire service watch manager John Noble, who died in 2008 when the appliance he was driving crashed into a tree on the A91 between Dollar and Tillicoultry.
They were aiming to raise £100,000 for the Firefighters’ Charity, who aim to enhance the quality of life for serving and retired firefighters, fire personnel and their
families.
Lisa Everingham, Talisker’s global marketing manager, congratulated the pair.
She said: “We are delighted for Team Noble and their epic row across the Atlantic.” 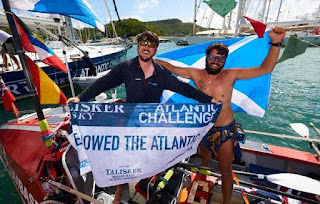 If you are scratching your head and asking yourself "why" you are not alone! But these two were obviously not the only ones to take on this stunning challenge! We have to acknowledge their accomplishment and offer a heartfelt "well done" to the brothers Elliot.

Posted by Maritime Maunder at 7:09 AM