2 January 2018: Happy new year to you all and again, apologies for being a bit tardy with a new post.... holidays, family emergency, etc....what can I say. We'll try to be more timely going forward. But here we are with something new. A timely article by Cassie Williams of CBC News. And by the way, December was the 100th anniversary of the Great Halifax Explosion.
~~~~~~~~~~~~~~~~~~~~

The "Grand Old Lady" of Halifax harbour is running out of time.
Corrosion, marine growth on the hull and leaky decks are eroding away the 104-year-old CSS Acadia bit by bit. 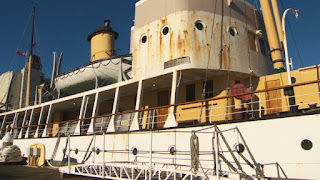 "I just think it's shameful," said heritage consultant David Flemming.
He's a member of the group trying to save the Acadia and worked for years as curator of collections and director at the Maritime Museum of the Atlantic, the ship's caretaker.
"I won't even go aboard her now. I haven't been on board the ship for five years. It's just too depressing."
Flemming is part the Oceans Association, a group run out of the Bedford Institute of Oceanography in Dartmouth, N.S., that is pressing the provincial government to fix the Acadia, which is recognized as a national historic monument. 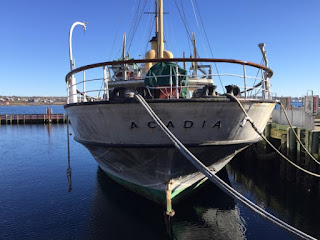 The Acadia is unique. Designed to map coastal areas, the vessel is thought to be the only Canadian ship still afloat today to have served in both the First World War, when it guarded Halifax harbour, and the Second World War.

It's also the only ship still afloat to have survived the Halifax Explosion a century ago. On that morning of Dec. 6, 1917, the Acadia was in the southeast corner of the Bedford Basin, between what's now the MacKay Bridge and the Bedford Institute of Oceanography. 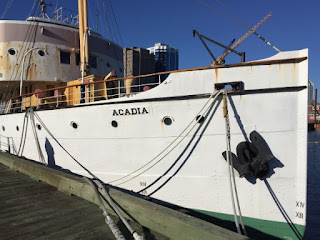 Frank Baker was a sailor on board when the blast happened. In his diary he wrote about a "shower of shrapnel" that shattered the glass in the ship's engine and chart rooms.
"It was the greatest miracle in the world that we were not all killed," wrote Baker.
After the explosion, the Acadia continued its hydrographic work, charting Atlantic Canada and the Eastern Arctic for another half century.
"Acadia, from my perspective, is probably one of the gems of historical artifacts in Nova Scotia, if not the country," said Flemming.
These days, the Acadia is a floating museum at the Halifax waterfront. Visitors can tour the main deck, but lower decks are now off limits due to mould.
The ship's last condition assessment was done in 2013 for the Department of Transportation. It found the Acadia in decent shape for its age, but there were serious problems that needed to be fixed in order to keep it afloat.

Sections detailing recommendations for fixing problems are redacted in a copy of the report released through freedom-of-information laws.
They were talking about half a dozen things that should be done immediately and they clearly haven't been done," said Andrew Sherin, vice-president of the Oceans Association.
Earlier this fall, he sent a letter to provincial Heritage Minister Leo Glavine and Transportation Minister Lloyd Hines, urging them to act.
Glavine initially declined to give an interview to CBC News, but said following an unrelated news conference Tuesday that he plans to have the Acadia out of the water in 2018 to start on the necessary repairs.
He said he will be asking the federal government to partner on fixing the Acadia, once they have a better grasp on how much it's going to cost.
"We're going to get at the work, and that's what I can commit to those who have had a wonderful interest and support for the future of the CSS Acadia. And I think you'll see in 2018 a movement to make sure that it happens," said Glavine.

Neither Sherin or Flemming can say what it would cost to fix the Acadia, though the leaking on the main deck is one of the most pressing issues.
"That water's still leaking into below deck, it's getting worse and worse. It's starting to rust the interior of the hull," said Flemming, who suggests it would cost a "couple hundred thousand dollars" to replace the deck.

The Acadia was custom built in 1913 to survey Canada's East Coast, stretching from the frozen waters of Hudsons Bay to Nova Scotia's South Shore. Some of the mapping the Acadia and its crew performed hadn't been updated since the 18th century and the explorations of James Cook.
The Acadia survived that work, two world wars and a more recent disaster.
"During Hurricane Juan, a couple of ships broke free but Acadia was snug as a bug in a rug there because they put out the storm lines, they had four people on board the entire time," Flemming said
Flemming hopes the government "puts its money where its mouth is," considering the $24 million it has spent restoring the Bluenose II.
"Bluenose II is a replica, I mean current Bluenose II is not even the same as the replica — it's a replica of the replica because they replaced almost everything in her. Which is fine, I have nothing against Bluenose II," said Flemming.
"But she's not a national historic site of Canada, she's not a ship that's 104 years old, she's not a ship that served in both world wars, she's not probably the most significant vessel afloat in the country."

Your editor totally agrees with the sentiment expressed by Mr. Flemming. Canada should indeed spend the money necessary to keep this historic vessel afloat and viable as a museum.