21 January 2018: During the American Revolution, in which the formerly British colonies won their independence from the Mother country, conflict was costly - for both sides. But the perhaps the worst and most heinous lost of life was on the prison ships - hulks actually - grounded around the waterfront in British-held territory of the rebellious colonies. The worst by far of these was the prison hulk Jersey, moored off the shores of Brooklyn New York roughly about where the Brooklyn Navy Yard was later built. The following is an except from a review of a book, Robert P. Watson’s terrifying new history, “The Ghost Ship of Brooklyn: An Untold Story of the American Revolution” that is both horrifying and riveting.


In the rock tumbler of history, the Revolutionary War produces a few well-burnished moments. Washington crossing the Delaware in small boat at Christmastime. Paul Revere galloping around Massachusetts after dark. Ragtag American guerrillas taking potshots at orderly ranks of redcoats.
But one story of the American War of Independence has eluded the popular imagination: the British prison ships in New York’s East River. 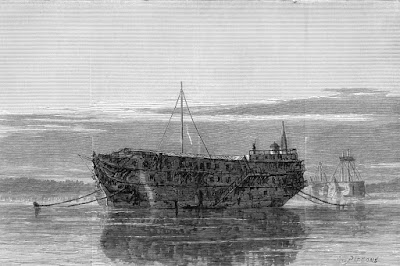 Docked in Wallabout Bay, near what would become the Brooklyn Navy Yard, these ships held American prisoners in hellish conditions. Sometimes called “floating dungeons” or “ghost ships,” the prison ships were nothing less than watery concentration camps, responsible for thousands of deaths. The 16-odd prison ships included HMS Falmouth, Scorpion and Hunter. But the most notorious was the Jersey. In its day, the mere mention of its name was enough to send shivers down the spine of an American patriot.
More than two centuries later, little remains of the Jersey and the ghastly fleet once anchored in Wallabout Bay. In the years after the war, the prison ships were something nobody cared to remember.

“This ship, the Jersey, the ‘ghost ship,’ it was the single bloodiest conflict of the entire Revolutionary War,” Watson tells The Post. “Not Saratoga, not Trenton, not Yorktown, not Germantown. The single bloodiest conflict was on board this one ship.”
How bloody was it? We’ll never know the precise number of men who died on the ships, but most scholars estimate the death toll at 11,500.
“This was the statistic that knocked me out of my seat,” Watson says. “Twice as many Americans died on this one ship than died in combat during the entirety of the Revolutionary War, from 1775 to 1783.”
Once a warship of the Royal Navy, by 1770 the Jersey was put to nautical pasture and “hulked.” Its guns and masts were removed, and it was converted into a sort of warehouse in the East River. In 1779, it was turned into a prison.
One internee said of the Jersey, “Without ornament, an old, unsightly hulk, whose dark and filthy external appearance fitly represented the death and despair that reigned within.”
The conditions on board the Jersey were by any measure appalling. Prisoners were locked in dark, overcrowded holds for days on end, often with no room to lie down. They were given brackish water and moldy food, if anything at all, and were kept company by lice, fleas and rats. For toilets, there were great barrels, overflowing with waste. The smell was unimaginable, the air so thick with filth that candles would not light. And pervading it all was a sense of terror from the guards, who showed no mercy. Most prisoners had little hope of ever leaving, and little hope at all. 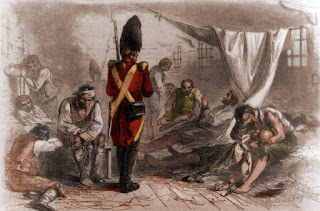 The British and Americans occasionally exchanged prisoners, although the British did not consider most of the prison-ship population to be legitimate soldiers. Many of the men imprisoned in the East River ships were privateers — crews from small rebel-friendly ships that raided British merchants in the Atlantic. By disrupting British trade and diverting royal resources, privateers were valuable to the revolutionary effort, but they were not officially part of the small Continental Navy. To the British, they were criminals, rebels. And in the calculus of prisoner exchange, one privateer hardly compared to a member of the British army.
There are rare accounts of prisoners escaping. More likely, they’d die. Smallpox, yellow fever, typhoid, dysentery, gangrene, starvation and murder by guards ensured that end for many prisoners. Some six to 12 died every day. Every morning, guards would greet their charges by shouting, “Rebels! Turn out your dead!” The bodies of those who had died the night before were brought up to be buried in the marshy riverbank. Sometimes the dead were left in the hold for days.
None of this was by accident. For the British, there was a purpose behind the Jersey. Watson says the British “saw this ship as a psychological weapon of terror.” They thought “so many Americans will die on this ship, that it will deter patriots from picking up arms against them . . . They designed this and nurtured this.” 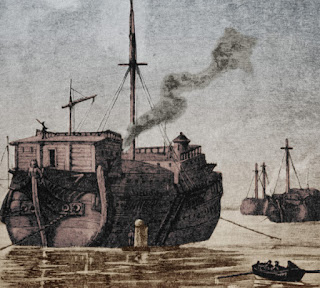 Yet, Watson notes, “it ended up having the opposite effect. When people heard about it, sons did not say, ‘Oh, my gosh, I’m not going to war,’ and mothers didn’t say, ‘Please, don’t join or you’ll go to that ghost ship.’ ” Watson likens the Jersey to the Alamo or Pearl Harbor — something that galvanized the population. “People rallied behind it,” he says, “and it ended up building support for the war. So the British’s diabolical plans didn’t quite work out.”

Our contemporary knowledge of the prison ships should also dispel a long held misconception about how the Revolutionary War was fought. Watson observes, “We have this misperception that the British fought a gentlemanly war. That. of course, the British are proper, they line up in colorful, meticulous red uniforms and fire volleys and the officers drink wine and sound like Prince Charles or something . . . [That is] far from the truth. Not so. They fought a total war. Everything but salting the earth and setting fire to every village.”
The Jersey held its ghastly cargo to the very end of the war, with the last prisoners leaving in September 1783. With the war over and the British gone from New York City, the rotting hulk of the Jersey was allowed to sink into the muck of the Wallabout Bay. In the excitement of the new nation, the Jersey was a nightmare many wanted to forget.
For many years, the bleached bones of the prison-ship dead would wash ashore on the Brooklyn side of the East River. Watson cites the Brooklyn College historian Edwin G. Burrows, who described the bones appearing “as thick as pumpkins in an autumn cornfield.”
Those bones — or a fraction of them, at least — now rest atop the highest hill in Brooklyn’s Fort Greene Park, in the Prison Ship Martyrs Monument. The monument overlooks Wallabout Bay. 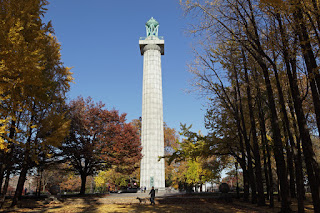 We don't often recommend books to our readers; too many different tastes to consider. But this one could appeal to more than just American history buffs; it affects all of us, one way or another.

Posted by Maritime Maunder at 11:05 AM