7 March 2017: In the early 19th century, a Russian sloop of war, Neva,  wrecked off Sitka Alaska. Recent discoveries have, perhaps, solved the mystery of what happened to the crew. Shipwreck enthusiasts have long wondered how they survived with basically nothing to sustain themselves. Now archeologists may have solved the puzzle. Courtesy of FoxNews.


On a voyage to the remote settlements on Alaska’s southeast coast, the ill-fated Russian ship The Neva ran aground during the brutally cold winter of 1813. More than 30 people aboard the vessel died and another 28 limped ashore where two more died of hypothermia in the harsh Alaskan wilderness before the remaining survivors were rescued three weeks later.

While the story of The Neva is well known throughout Alaska, the location of the shipwreck and how the survivors endured in that rugged landscape with little more than what was in their pockets has remained a mystery for over two centuries.
But the recent discovery by an international team of researchers funded by the National Science Foundation of a campsite used by the survivors has shed new light on what life was like for the survivors and pointed the archeologists to the Neva’s final resting place. 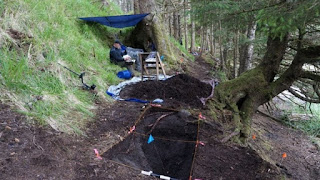 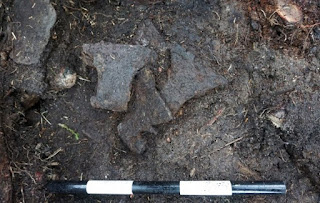 Axe heads found at the camp used by survivors of The Neva (Courtesy of Dave McMahan)
“The Neva is almost legendary in Southeast Alaska,” Dave McMahan, an archaeologist and the expedition’s chief investigator, told Fox News. The Neva was one of the first Russian ships to make an around-the-world voyage and participated in the Battle of Sitka in 1802, where the Russian navy bombarded the Tlingit indigenous people.

McMahan and his fellow researchers first began finding clues about the survivors of the Neva back 2012 when they unearthed the remains of cooking fires and axes on Kruzof Island at the mouth of the Sitka Sound. Underwater exploration for the Neva, however, proved unsuccessful as the iron in the volcanic rocks off the island rendered the researchers’ marine magnetometer and “The iron in the rock may have been one of the reasons the Neva ran aground in the first place,” McMahan said. “Even when I was diving in the water my compass was off.”

McMahan added that huge amounts of kelp also cloud the water and that a drastic rising of the sea bed over the last 200 years means that remains of the Neva were more likely in the island’s interior than in the water.
“We were looking on the beach when we should have been looking in the trees,” he added. 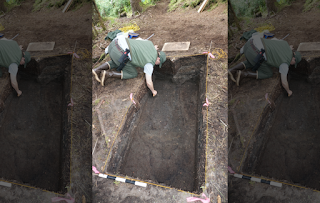 In 2016 – after years of searching led to smattering of axes, fire pits and other discoveries – the team made one of its most important finds to date when they uncovered a grave believed to belong to Tertii Stepanovich Bornovolokov.
Bornovolokov, the highest ranking member on The Neva, was set to take over as chief manager of the Russian American Co. in the North American settlements and is believed to be one of the wreck’s two survivors to die from hypothermia. The Russian American Co. was a state-sponsored chartered company tasked with establishing new settlements in Russian America and carrying out an expanded colonization program.
The sinking of The Neva was the last in a long line of misfortunes to befall the Russian merchant ship. Before it even left port in Siberia, the ship’s captain drowned during inspection and harsh weather and lack of fresh water led to the death of 15 passengers and crew members even before the ship ran aground.
Local legend states that a Tlingit shaman cursed the ship for its role in the Battle of Sitka and the spot where the ship ran aground is considered sacred ground to the Tlingit people.

“Because of the Battle of Sitka, the Neva is still thought of with a lot of animosity from some people in Alaska,” McMahan said.
With the discovery of the survivor camps, McMahan hopes to not only shed light on what happened in the past but also highlight how this discovery could help shape current events.
“With our country's poor relationship with Russia right now, and all the negativity in the news, the NEVA project is a good example of positive cooperation to study a little known shared history,” he said. “In 2014 as we were trying to get off the ground, the planned NEVA Project was adopted by the U.S. - Russia Bilateral Presidential Commission as a worthwhile cooperative endeavor."
He added: “It was truly an international project in that we had participating scientists from the U.S., Russia, and Canada.”

Interesting story. And there may be more to come!


Posted by Maritime Maunder at 7:36 AM