18 April 2016: We have all seen pictures of the camouflage patterns used on ships by most nations to disguise them or ust make them harder for lookouts to spot in the distance. Modern radar, fire control systems, and missile guidance systems have made painting ships in disguising patterns all but obsolete, but it was, in the 1st and 2nd World Wars, crucial to the survival of naval assets. A particularly odd, but apparently very effective form of camouflage was called "dazzle" and you can see why: 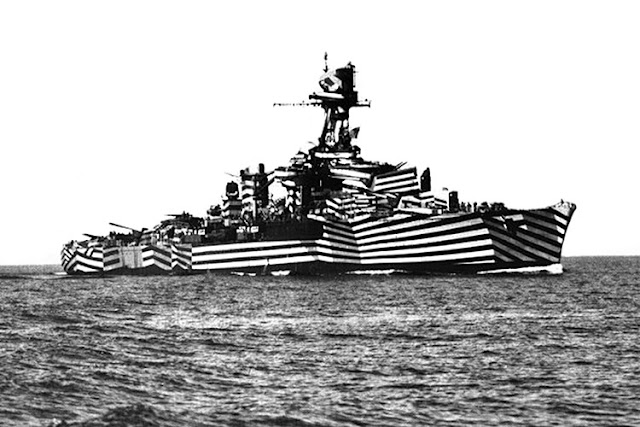 The French Galissonnière class light cruiser, Gloire, in dazzle camouflage, circa 1940.
During the First World War, patterns of ‘disruptive colouration’ were applied directly to guns, trucks and tanks to disguise them from reconnaissance aircraft or spotters in enemy trenches. Given the historic strength of the Royal Navy, it followed logically that Britain would be the most innovative in developing the field of naval camouflage. For, while the human losses on the Western Front were staggering, it was the loss of merchant ships carrying troops, supplies and munitions that took the greatest economic toll. They became easy targets for torpedoes as soon as Germany announced its campaign of unrestricted submarine warfare in January 1917.


Dazzle is a development curious to the modern mind, which defines camouflage as something that blends an individual in with its surroundings. These striped ships, highly visible, seem more appropriate to the realm of art than combat and occupy a unique place in military history, as one of the few instances where the widespread use of professional artists was of considerable tactical value.


Norman Wilkinson, who developed the idea for dazzle camouflage and oversaw the operation, was an accomplished marine painter before the war. He submitted his camouflage idea to the Admiralty in spring of 1917 and was allowed a trial that August. Previous proposals, which attempted to paint or cover ships to blend them with the water and atmosphere, were unsuccessful due to the vagaries of weather at sea. However, the results of a trial convinced the Admiralty in October 1917 to recommend that all merchant ships receive Wilkinson’s camouflage. Dazzle designs both dismantled the outline of the ship and created an optical illusion that deceived enemy eyes in submarines regarding the speed, size and direction of the painted ships. By November 1918, over 2,300 vessels were painted with unique schemes. The US navy also adopted the dazzle approach in 1917, along with four other camouflage methods.


All dazzle patterns were developed in a London studio by Wilkinson, five male designers and 11 female art students. They observed painted models, judging the effectiveness of deception using a periscope and turntable before sending them to the ports as templates. At the ports, men such as Vorticist artist Edward Wadsworth, who oversaw the painting of ships at Bristol and Liverpool, tailored the patterns to individual vessels. Generally, the designs consisted of angular, geometric shapes in no more than four colours. Shapes never aligned with a ship’s edge but carried through to the other side or over the railing and onto the smokestacks. Port and starboard patterns were always different, too. Adopting a characteristic of modern art, the design very intentionally did not fit its canvas (the ship) but rather seemed to take on a shape of its own.
I can remember my father describing these strange patterns to me (then a child) during WWII as he saw allied ships arriving at the Brooklyn (NY) Navy Yard and later, at Bayonne. The patterns were discontinued during that war, moving to the more traditional type we have all seen in pictures. But it is easy to see, if you look at the image above for a while, how it could confuse a submarine captain peering through his periscope!


Thanks to Margaret F.M. Walker, assistant curator at the Vanderbilt University Fine Arts Gallery in Nashville, Tennessee for much of this posting.

Posted by Maritime Maunder at 7:00 AM