1 April 2016: Since it's April Fool's Day, it seems appropriate to offer some of the great military deceits and hoaxes from history - and no, they are not all maritime in nature, but still interesting.

Thanks to Military History Now for his article and pictures. 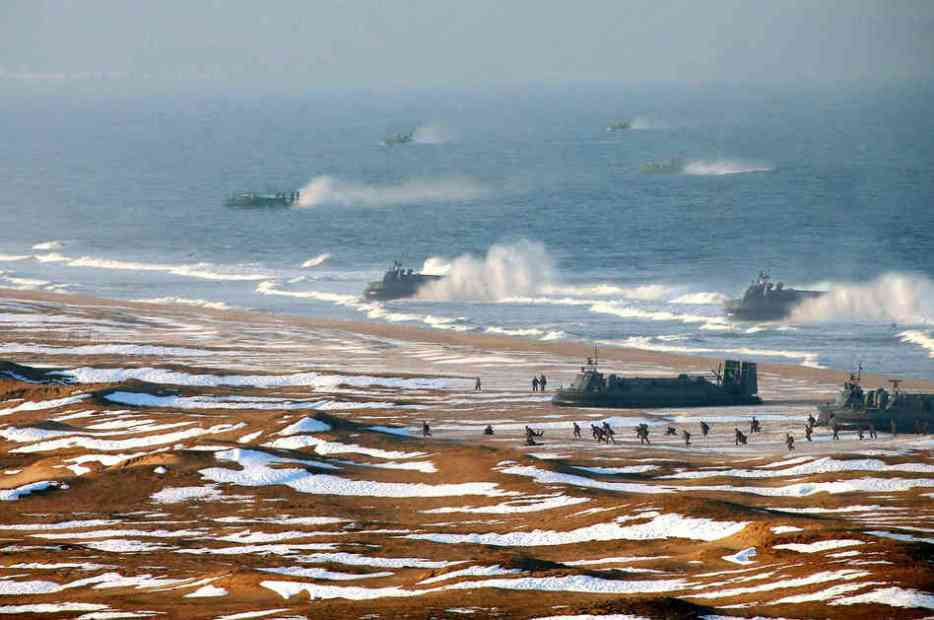 North Korea issued this photo last week, which appears to show a flotilla of landing craft assaulting a beach. Upon closer inspection, many of these vessels are superimposed on the image. An April Fools’ Day trick? Image courtesy KCNA.

“’All warfare is based on deception,’ wrote Sun Tzu in his seminal work The Art of War and he was right.”

NORTH KOREA MADE HEADLINES in April of 2013 when it was discovered that a photograph of its army rehearsing an amphibious assault had been doctored using Photoshop.
The image, which was released by the reclusive regime amid rising tensions between Pyongyang and Seoul, showed eight landing craft depositing troops onto a beach as part of a demonstration North Korean military might.
Oddly enough, two of the craft in the photo were reflecting sunlight almost identically, suggesting that at least one was digitally added to the frame (possibly even both). Then there were the plumes of surf being thrown into the air by the speeding vessels — they also appear to have been added electronically. The international media yanked picture from circulation once keen-eyed journalists had spotted the tampering. The French press agency called the level of photo manipulation “excessive”.
Despite the stir the image created in the western press, defence planners in Pyongyang weren’t doing anything that hasn’t been tried by other generals throughout history.
“All warfare is based on deception,” wrote Sun Tzu in his seminal work The Art of War and he was right. Long before the advent of Photoshop, military leaders have tried to mislead and confuse their enemies in all sorts of ways. And what better time is there than April Fools’ Day to share eight of our favourite examples of battlefield trickery. 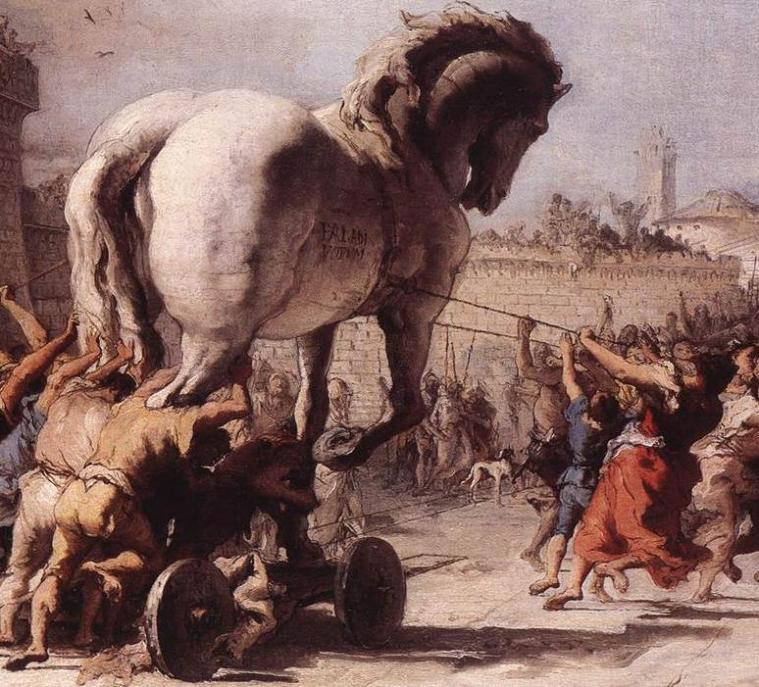 A 19th Century painting of the fabled Trojan Horse.
Homer’s Illiad describes how Greeks in the 12th Century BCE, unable to breech the walls of the fabled city of Troy for 10 years, constructed an enormous wooden horse as an apparent peace offering to their long-time enemies. The Trojans happily accepted the token and dragged it within the walls of their fortified city to celebrate the end of the war. Later that night as the Trojans slept, Greek soldiers emerged from inside of the statue and put the city’s inhabitants to the sword. Historians believe that the story of the Trojan Horse is most likely a myth and that the large structure was more likely a horse-shaped battering ram. Others have speculated that there was no horse at all and that a group of warriors spoofed their way into the city within the ranks of a peace delegation. 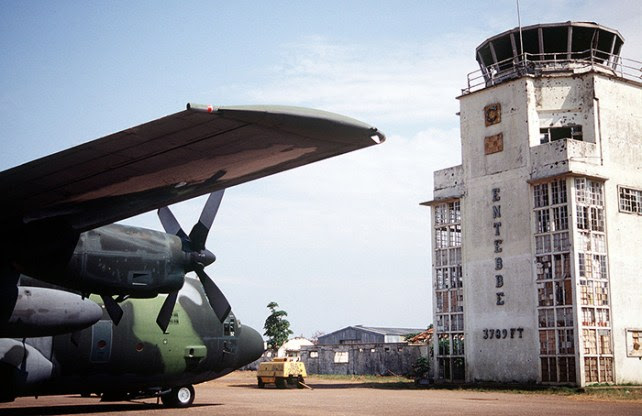 The air terminal at Entebbe, Uganda as seen in 1994. (Image source: WikiCommons)
The Israelis would borrow a page from the ancient Greek epic in their famous Entebbe Raid of July 4, 1976. As pro-Palestinian hijackers held 106 civilian hostages from the Jewish state in an airport in friendly Uganda, IDF commandos infiltrated the facility inside a procession of vehicles that were painted to resemble the motorcade of the African dictator Idi Amin. As the cars came to a halt in front of the main air terminal, Israeli paratroopers leapt out and assaulted the building freeing the captives and killing the terrorists in a brief but furious firefight. Moments later, both the rescuers and hostages escaped to safety aboard a C-130 that had quietly touched down on the edge of the field. 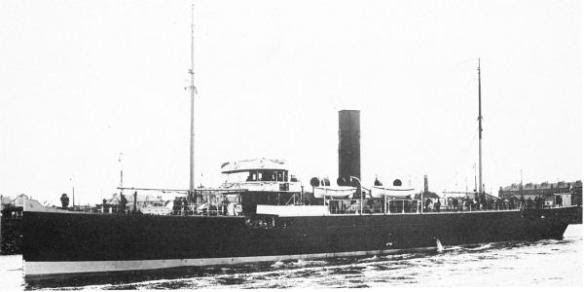 HMS Tamarisk — armed merchant ships like this gave German sub crews some nasty surprises. (Image source: WikiCommons)
Not so much Trojan Horses as wolves in sheeps’ clothing were the Allied Q-Ships of the First World War. Designed to appear to German submarine skippers as helpless tramp steamers, each of the vessels was manned by a crew of trained Royal Navy personnel and carried concealed cannons and machine guns. When a U-boat would surface to engage the target, the Q-ship would run up its naval ensign, reveal its guns and unleash a hail of fire onto the unsuspecting enemy. More than 350 Q-ships (codenamed Q for the port of Queenstown, Ireland from which the first of them sailed) put to sea. In all, they sank 14 U-boats in total and damaged another 60. 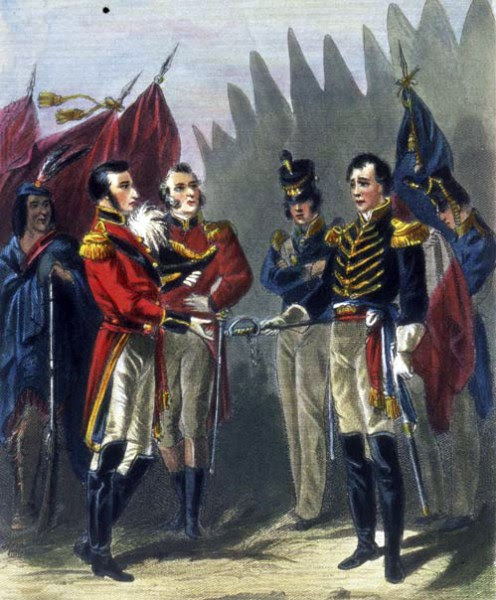 General Isaac Brock outfoxed the American garrison at Detroit in 1812.
Another method of wartime deception involves making a tiny army look much larger. That was British general Isaac Brock’s strategy while marching his scant force of 300 regulars against 2,000 U.S. troops occupying Fort Detroit in August of 1812. In order to cow the defenders into submission, Brock had his infantrymen loan their spare uniforms to the accompanying militia to give off the impression he had twice as many of his dreaded red coats. The general also had the native war chief Tecumseh repeatedly parade the same 600 warriors through a small gap in the treeline in front of the American fort. The seemingly endless procession of tribesmen convinced the defenders that thousands of hostile natives were about to swarm the stockade. The American commander, William Hull, went to pieces and capitulated without a fight. Hull was later convicted of cowardice; Brock was knighted for his genius. 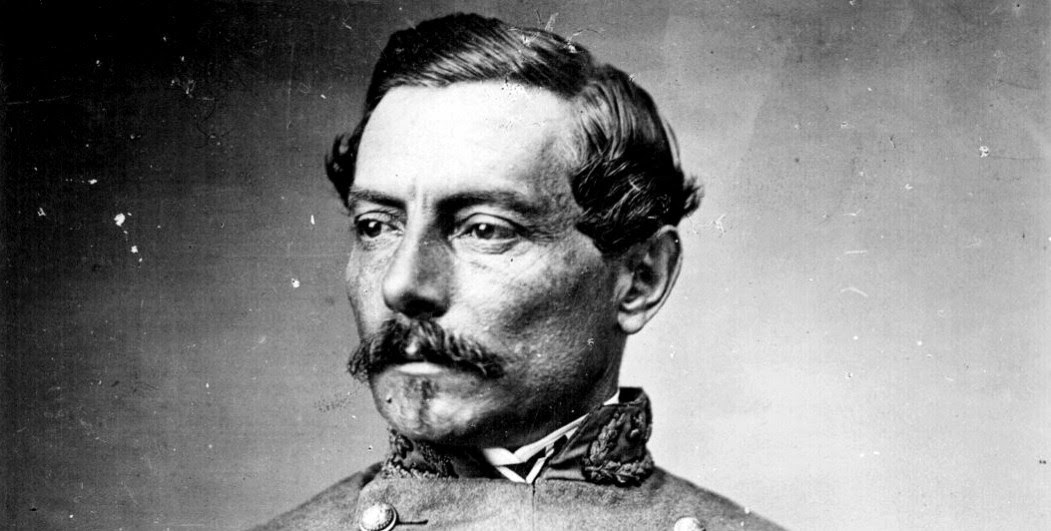 Confederate general P.G.T. Beauregard fooled the Yankees into thinking that thousands of Rebs were pouring into Corinth, Mississippi. IN reality his small army was slipping out of town.
Confederate general P.T.G. Beauregard undertook a similar subterfuge in May of 1862 at Corinth, Mississippi. Outnumbered more than two to one and expecting a massive Union assault at daybreak, the clever rebel commander ordered a single locomotive rolled in and out of the town all night making it sound as if thousands of fresh troops were arriving on a endless procession of trains. To add to the charade, he had his men cheer lustily each time the lone steam engine pulled into the station, fooling the Yankees into believing the reinforced Southerners were spoiling for a fight. Meanwhile, Beauregard was actually evacuating the town; the sound of the train even masked the noise of his army breaking camp. 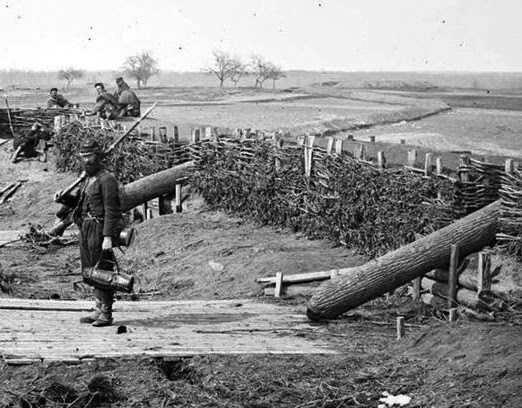 These logs looked enough like cannons from a distance to fool the Union army into thinking this rebel position was bristling with artillery.
During the Revolutionary War, outnumbered and outgunned generals often erected phoney gun emplacements using painted logs cut to resemble artillery pieces. Nicknamed “Quaker guns” after the pacifist religious sect, just one of these harmless log cannons towed into battle by horses looked real enough to convince an entire force of Tories to surrender to a much weaker army at Camden, South Carolina in 1780. Eighty years later, the beleaguered Confederates used the same ploy on a number of occasions to deter Union attacks. In 1862, General Joseph E. Johnston erected batteries of Quaker guns at Centreville, Virginia to keep the Yankee army at arms length while his tiny force withdrew and lived to fight another day. Later, Confederate earthworks at the Siege of Petersburg were made to look all the more impregnable through the use of Quaker guns. 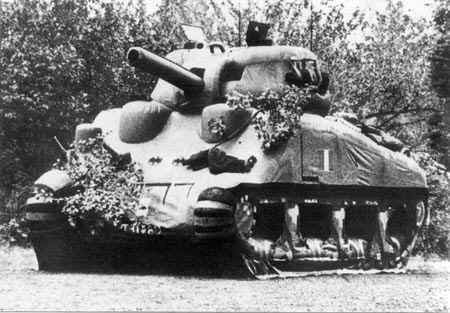 Inflatable tanks like this were harmless, but they certainly looked menacing enough to enemy reconnaissance.
Similar to log cannons, both the Allies and the Nazis deployed dummy tanks and aircraft made of wood and canvas during the Second World War. In fact, throughout the North African campaign, the British built three non-existent armoured regiments using the mock vehicles, some of which could be fitted over jeeps and moved about the battlefield to enhance the illusion. The Americans specialized in rubberized inflatable Sherman tanks that looked remarkably lifelike from a distance. To this day, the U.S. Army equips its units with $3,000 duffel bag-sized inflatable dummy tanks that are near perfect replicas of the $4 million M-1 Abrams. Meanwhile, one Chinese-based company sells all manner of inflatable decoy vehicles to armies (and presumably film makers) worldwide. 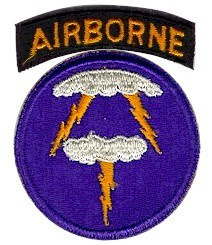 An arm patch for the U.S. 21st Airborne Division of World War Two. Never heard of that unit? That’s because it didn’t exist.

Perhaps the greatest wartime deception in all of military history occurred in the lead up to the 1944 Normandy invasion. That’s when the Allies fooled the enemy into thinking that a massive force, known as the First United States Army Group (FUSAG), was poised to strike at the French Pas-De-Calais from southern England. Of course, FUSAG was a sham; the actual Allied army was preparing to invade 200 miles to the west at Normandy. The epic fake-out was known as Operation Fortitude. Details of the phantom Allied army were purposefully leaked through diplomatic channels and the press, while non-existent divisions, like the British 2nd Airborne, the imaginary U.S. 9th and 21st airborne and the Fourteenth United States Army, were all conjured into existence, complete with orders of battle and even regimental insignia. A massive effort aimed at simulating radio chatter of the fictional units was also mounted. Dummy landing craft and vehicles were concentrated near Dover, England to fool spies and observation planes. Even General Patton, who had been sidelined in 1943 for striking a pair of shell shocked GIs during the campaign in Sicily, was appointed to head up the fictional army. The firebrand army commander was often seen travelling throughout southwest England by jeep, ostensibly to visit FUSAG units. It was all a part of the theatrics. The plan worked so well that when the Allies invaded Normandy, the German high command held back its crack units believing that the June 6 landings were only a diversion. Berlin, having fallen hook line and sinker for Fortitude, was convinced that the real blow would fall in July at the Pas De Calais.

OK,that's it for today. I hope you survive whatever pranks people try on you and your own pranks are successful!

Until next time,
Fair Winds,
Old Salt
Posted by Maritime Maunder at 8:16 AM