12 October 2015: OK the title might be a trifle misleading - the birthday of the US Navy is actually tomorrow, 13 October. But I may not get time to post so an early happy birthday to the US Navy! Today, 12 October is a noteworthy day but for a quite different reason: it is the 15th anniversary of the terrorist bombing of the USS Cole, a US Navy destroyer, in Aden Yemen. 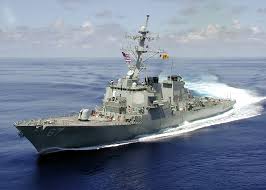 This is USS Cole prior to the attack, and here are a couple of images following that terrible event that killed 17 US Sailors and wounded another 38.

And after first being towed to safety and loaded aboard a huge ship transporter for return to the U.S. she was restored and put back in service: 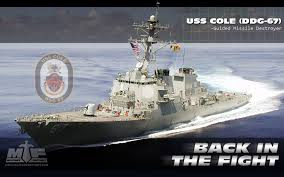 So, a fitting tribute to the Navy on the day before its birthday! As a matter of interest, while the terrorists who blew the hole in the ship were of course incinerated in the blast, those behind the attack were never brought to justice - or even chased down by the Clinton administration.
~~~~~~~~~~~~~
And tomorrow, on 13 October, we salute the US Navy, born in 1775 at a meeting of the Continental Congress in Philadelphia when it voted to fit out two sailing vessels with 10 carriage guns and swivels and manned by crews of 80 men. The ships were to be sent out on three month cruises to intercept and destroy British ships carrying munitions to America. While the ships (ultimately, 50 ships fought in the Revolution) were decommissioned or sold after the war, Congress again voted to build six frigates in 1794, re-constituting a navy. USS Constitutition, United States, Congress, President, Chesapeake, and Constellation were ultimately built, fighting during the "Quasi-war" with France and the War of 1812 against Great Britain. Constitution still exists in Boston and is the oldest commissioned war ship afloat in the world (though she is currently in drydock undergoing an overhaul). 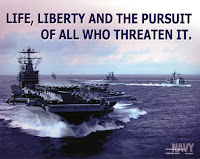 Until next time, friends, I wish you all

Fair Winds,
Old Salt
Posted by Maritime Maunder at 7:58 AM