15 September 2015: So much has happened over the past few days - historically speaking, that is, that we will combine several events in this post using simply a brief synopsis of each. Just to bring you up to date. I was traveling and unable to post on the right days, so we're stuck with an amalgam of history. I am sure you all know the stories in any case!

On 11 September 1814, the British fleet arrived in the outer harbor of Baltimore with the intent of landing troops on North Point to march into the city while the navy bombarded the fort - Fort McHenry - at the entrance to the inner harbor. The commanders, Admirals Cochrane and Cockburn, along with General Ross, figured that it would be an easy undertaking, that the people would simply run away and not fight, just as had happened in Washington City. 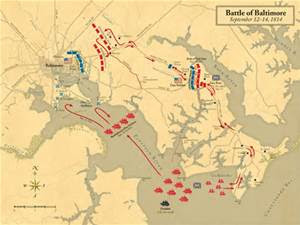 Not so much, as it turned out! The American troops and militia stopped the British cold at North Point, killed General Ross who was leading his troops, and Fort McHenry withstood 25 hours of bombardment. The failed effort happened over several days, from 12-14 September. 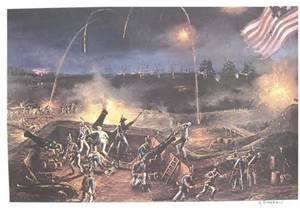 Cochrane realized this would be a losing proposition and recalled his ships and soldiers. They left within a couple of days, but the battle, in addition to being a great win for the U.S. also provided us with what would be become (in 1931) our national anthem, The Star Spangled Banner, composed originally as a poem entitled The Defense of M'Henry by Francis Scott Key. 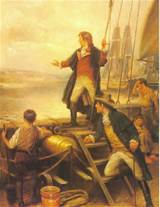 ﻿﻿﻿Meanwhile, up north on Lake Champlain, Thomas Macdonough was gaining a monumental victory over the British fleet which included a land win with barely a shot fired. British General Prevost was supposed to attack the town of Plattsburgh (NY) while Commodore Downey took control of the lake. When he saw that Downey was getting the worst of it, he reversed course and headed back into Canada (He was ultimately sent home in disgrace). Had Prevost prevailed, he would have opened the way straight down the Hudson Valley right into New York City, effectively dividing the country in two.


These two victories changed the negotiations that were underway in Ghent Belgium between the British and American diplomats for a peace treaty, forcing them to ultimately agree to a Status Quo Ante Bellum treaty. And all because the Americans "got it together" at Baltimore and Plattsburgh!


So now you're updated and we are more or less current with our history lesson!
Until next time, then,
Fair Winds,
Old Salt