AND ANOTHER ONE BITES THE DUST

22 September 2015: Some time ago, we posted about the Navy's not-so-brilliant Littoral Combat Ships (LCS) (the concept doesn't work OR fit the model for today's naval role) and we may have mentioned that the backbone of the surface navy, the frigate, was being systematically destroyed. And so it goes. The Navy has announced yet another frigate, USS Kauffman FFG 59 has been decommissioned and made available for "foreign military sale." We have one left in the fleet.

So, what the hell is the government thinking? No answer here. It totally escapes my comprehension. Unless of course, it has to do with shrinking our fleet to the lowest level since before WWI along with the rest of the armed forces. The mission carried out by Kauffman most recently was drug interdiction in the U.S. Southern Command - and now, the under-staffed, under funded, and surely under-appreciated Coast Guard will have to take up the slack! 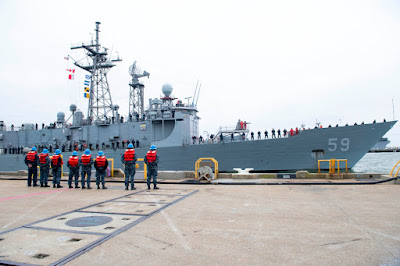 the Image above is Kauffman departing Norfolk VA on her final deployment. And today, she is deemed useless to the U.S. Navy by some pencil-pushers in Washington. The Perry Class frigates have been the work horses in the surface fleet, sailing to Africa, the Middle East, and the Pacific. In 1989, Kauffman was part of a squadron that transited the Bosphorus and entered the Black Sea port of Sevastopol. Her she is with the guided missile cruised USS Thomas S. Gates )CG 51). 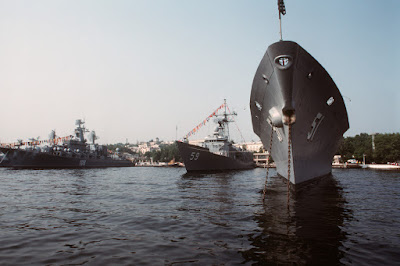 Obviously, the cruiser is the larger one! And to the left above is the Soviet guided missile cruiser Slava.

So, the end of the Perry Class frigates is in sight. The final member of the class will be decommissioned 29 September, 2015. Of the 15 ships that will have comprised this class, 10 have been made available for foreign purchase while the remainder were/are being dismantled. So, once again, Washington has short-sheeted the bed, leaving our fleet with virtually no reserves.