9 May 2022: We're baaaaaaack! Hope you didn't miss us too much! We were discovering the Pacific Northwest on the Snake and Columbia Rivers, following the path of explorers Lewis and Clark. Very interesting, beautiful country, but desperately wet! Not much need for sunglasses! So today, we're bringing you a follow on piece regarding the cannons discovered during dredging in the Savannah River, Georgia (USA). We originally posted on 27 February about the discovery and here is a bit more. From CBS News:


A warehouse along the Savannah River is holding historical treasures that evidence suggests remained lost for more than 240 years - a cache of 19 cannons that researchers suspect came from British ships scuttled to the river bottom during the American Revolution.

The mud- and rust-encrusted guns were discovered by accident. A dredge scooping sediment from the riverbed last year as part of a $973 million deepening of Savannah's busy shipping channel surfaced with one the cannons clasped in its metal jaws. The crew soon dug up two more. 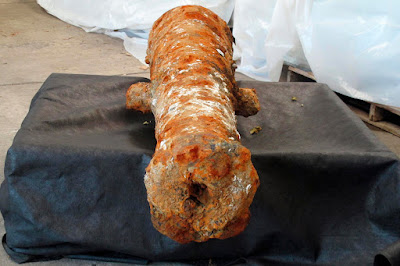 Archaeologists guessed they were possibly leftover relics from a sunken Confederate gunship excavated a few years earlier in the same area, said Andrea Farmer, an archaeologist for the Army Corps of Engineers. But experts for the U.S. Navy found they didn't match any known cannons used in the Civil War. Further research indicates they're likely almost a century older and sank during the buildup to the Revolutionary War's bloody siege of Savannah in 1779.

In a timeframe of just over a year, 19 cannons were hoisted from the same area of the river a few miles downstream from Savannah, where Georgia was founded as the last of Britain's 13 American colonies in 1733.

"They're in remarkably good shape," Farmer said. "Many were buried in clay and covered by silt and debris that kind of protected them."

Now officials with the U.S. and British governments, as well as the state of Georgia, are working together on an agreement to preserve the newly found guns before putting them on display. Commodore Philip Nash of the British Royal Navy, a military attache based in Washington, viewed the artifacts submerged in metal tubs of water during a visit Thursday. 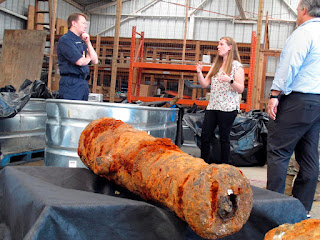 "Some of these pieces are in amazing condition and I'm sure could tell some stories," Nash said. "So the team here (is) obviously doing great work to recover those and preserve them for the future."

The cannons are being kept in water to prevent further deterioration until experts can carefully clean them. Meanwhile, researchers are looking for more definitive proof linking the cannons to British ships from the American Revolution.

Farmer said researchers are very confident of the connection. Savannah had been under British occupation for about a year by the fall of 1779, when colonists planned an attack to retake the city with help from French and Haitian allies.

When French ships carrying troops were spotted off the Georgia coast, the British hurried to scuttle at least six ships in the Savannah River downstream from the city to block the French vessels. The land battle that followed was one of the bloodiest of the war. British forces killed nearly 300 colonial fighters and their allies, while wounding hundreds more.

Farmer said researchers suspect the cannons found in the river came from the British ship HMS Savannah and possibly a second ship scuttled at the same time, the HMS Venus. The longer guns appear to match cannons manufactured in France during the mid-1700s, she said. Researchers are looking for ship logs and manifests in hopes of confirming the armaments aboard those ships.

It's also possible the cannons themselves and other artifacts found at the site - pieces of anchors and a portion of a ship's bell - once cleaned might bear markings or other clues to which ship they belonged to. The wood from those ships, Farmer said, decayed long ago or got destroyed by prior dredging projects over a series of decades.

The question of who owns the artifacts gets a little murky. They were found in state waters of Georgia during a dredging project headed by the Army Corps, a U.S. government agency. The British government could make an ownership claim if there's strong evidence the artifacts came from British ships.

Farmer said all of those parties are working on an agreement to preserve the cannons and ultimately have them displayed at the Savannah History Museum, which incorporates the battlefield where the bloodiest fighting occurred during the 1779 siege.

"Everybody wants to keep the artifacts in Savannah," Farmer said, "because that makes the most sense."

Things like these wonderful artifacts turn up, it seems, more and more frequently; that is a great thing and we learn more history and correct per-conceived notions with each find.

Posted by Maritime Maunder at 1:43 PM