SPANISH TREASURE - THERE FOR THE TAKING (IF YOU CAN FIND IT!)

2 JANUARY 2022: Well, here we are; another year in the wake, thankfully, and hopefully, this new one will be an improvement!

We are in winter quarters now and thought this post might be appropriate for maritime folks with an interest in treasure - and who doesn't have an interest in lost treasure!

There’s A Shipwreck Ruin From 1715 With 3,000,000 Silver Coins Near The Treasure Coast Of Florida

There’s a history of shipwrecks within the great state of Florida that is both tragic and awe-inspiring. One involves a natural disaster and men who were at the mercy of Mother Earth. Anyone who lives between Vero Beach and Sebastian, Florida likely already knows the story of The 1715 Spanish Fleet. In fact, you may be one of the lucky locals who has found a gold coin wash ashore on your trip to the beach. The story behind this Spanish Fleet is remarkable, to say the least, especially after the most recent jaw-dropping discovery in 2015.

Also known as the 1715 Plate Fleet, these ships were filled with various types of treasure, including 3,000,000 worth of silver coins.

As the trade routes went back then, the ships would need to pass along the southern coast of Florida in order to make the trip across the Atlantic on the journey back to Spain.

However, just a few days after departing from Cuba, a hurricane swept along the Florida coast, destroying 11 of the 12 ships as well as the majority of the men on board.

With the ships went millions of dollars in silver coins, gold coins, artifacts, treasure, and so much more. This treasure set off a frenzy over the years for treasure hunters who were seeking to find it and claim it. 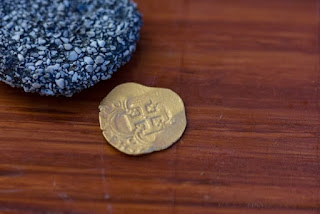 Pirates, privateers, and looters in the 1700s all converged toward what is now present-day Sebastian, with some making off with very valuable items.

The location of where these ships went down is between present-day Vero Beach and Sebastian, Florida. Divers have been combing this area beginning in the 1960s and it's still ongoing to this day.

The Spaniards abandoned the salvage camp in 1718, despite leaving incredible treasure behind. However, with time and more modern machinery, hunters would find so much more than they anticipated.

In fact, famous ship diver Mel Fisher was the one to find the Spanish galleon Nuestra Señora de Atocha in the 1970s. Aboard this ship was “The Atocha Motherlode” which included 40 tons of gold and silver, plus 114,000 Spanish silver coins. In total, the cache was worth $450 million.

Mel Fisher’s Treasures eventually sold the rights to the shipwreck to another treasure hunting company, Queens Jewels, LLC. This proved to be quite fruitful for founder Brent Brisben who went on to discover $4.5 million in gold coins from the 1715 wreck in 2015.

Today, people can visit the Site of the Survivors’ and Salvagers Camp near McLarty Treasure Museum, as well as various collections of treasure showcased at museums across the state.

Heck, you may even be one of the lucky ones just walking the beach after a storm and finding a gold coin glistening in the sun. Believe it or not, it’s way more common than you think.

And for those of you interested, Mel Fisher's treasure museum is in Key West (Florida) and for a small entry fee, you can see all the wonderful relics his team brought up from La Senora de Atocha. It is quite spectacular and apparently, there is much more down there on the bottom of the sea. Good luck!