3 July 2021: Here in the United States it is Independence Day Weekend and we celebrate the 245th birthday of the country. While we Americans are proud to have won our independence from Mother Britain, we maintain a close relationship with her and recognize her long and brilliant history, especially in the maritime arena. Most people have heard of Admiral Lord Nelson's flagship, HMS Victory, but possibly many are unaware that the ship on display at the Royal Dockyards in Portsmouth England as the "oldest commissioned warship" in the world is the second vessel in the Royal Navy named Victory. Edited from from the Daily Mail UK, the discovery and exploration of the first HMS Victory.

A diver has shared stunning images captured during a treacherous dive to investigate a 300-year-old Royal Navy ship wreck. 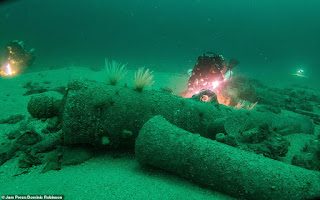 The 100-gun ship was launched in 1737, and seven years later it was the flagship of a fleet led by Admiral Sir John Balchen.

He successfully led a force to relieve a British convoy trapped by a French blockade of the River Tagus, in Portugal.

But on the return journey, Victory was separated from the fleet and sank on 5 October 1744. 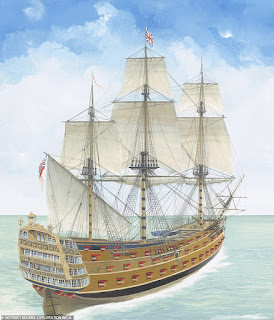 Its sinking is considered the worst single British naval disaster in the English Channel.

The ship, which predated Lord Nelson's famous flagship of the same name, was long sought after by wreck finders.

It was discovered lying 50 miles south-east of Plymouth in 2009 by Florida-based Odyssey Marine Exploration.

When Lord Nelson's Victory was named, there were some doubts about using the title because of the fact that the 1744 vessel and all of its sailors had been lost.

The more famous HMS Victory was the flagship at the Battle of Trafalgar, in which Britain - led by Lord Nelson - triumphed against Napoleon's France in 1805. Lord Nelson was famously killed in the battle.

Organising a dive to HMS Victory proved to be a significant challenge for the team of divers, as there are only a relatively small number of days per year when the conditions are suitable for diving this far out and at this depth.

They spent just over three hours in the water observing the shipwreck in the depths of the ocean.

The incredible photos show the cannons of the shipwreck have been well-preserved, despite having spent nearly 300 years under water.

Some of the cannons even visibly display the beautifully detailed royal crests.

Muzzle tampions - canvases that cover the guns - also remain in place, and it's very likely that the guns are still loaded.

Although the cannons are undoubtedly the main attraction, the team was very surprised to see how much else remained on the site.

The divers also discovered a massive copper kettle and galley bricks - a reminder that HMS Victory was once home to more than a thousand men.

Diver Richard Keen, who began searching for the Victory in 1973, previously said: 'It was the wreck that every wreck-finder wanted to find.'

The professional diver from Guernsey grouped together with five others to scour the seabed for two months near Les Casquets, a group of islands eight miles west of Alderney, the northernmost Channel Island.

The group did chance upon the wreck of passenger steamer Stella, which sank in 1899 claiming 105 lives but HMS Victory remained elusive.

Search efforts initially focused on the infamous Casquets - where the ship was thought to have been wrecked due to the poor navigation of Balchin.

But in 2009, Odyssey Marine Exploration announced it had discovered Victory, 62 mile away from those rocks.

This suggested that a fierce storm rather than a navigational error had been behind the sinking.

As with the Mary Rose, the Tudor warship which was raised in 1982, there was great public interest in the find.

Built during a period of British naval ascendancy, Victory, and its more famous successor, was one of the most expensive and grandest ships of the period.

'This is basically a grave - this is the last resting place of 1,100 British sailors and it should not be disturbed lightly,' said Robert Yorke, chairman of the Joint Nautical Archaeology Policy Committee, in 2019.

'You don't go into a local churchyard and start digging them up hoping you're going to find some gold underneath the bodies.' 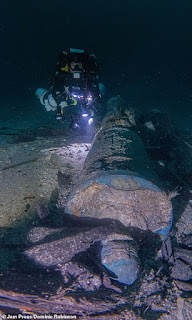 Mr Yorke was a long-term opponent of the foundation's plan to excavate the wreck site, saying the project lacks adequate funding, facilities and a museum willing to house artefacts.

He also said the foundation's contractors Odyssey Marine were motivated by profit.

This is a claim the foundation rejected. It pointed out that selling artefacts to fund the project would be illegal.

When a skull was found on the Victory wreck, work immediately stopped and the MoD was informed, it says.

In September 2018, the wreck site was declared 'environmentally stable' and ordered to be 'left in situ', according to the MoD and the Department for Digital, Culture Media & Sport.

In addition, Unesco rules do not allow for items to be removed from the wreck. A September 2019 High Court ruling confirmed that artefacts should remain on the wreck.

Quite a story - and as a former diver, I can only imagine what the conditions must be like at 250' in really cold water!

To our fellow Americans, Happy Independence Day and stay safe!

Posted by Maritime Maunder at 12:46 PM