16 May 2021: OK we admit this is a bit weird, but then you never know. No info on where this is (except under a lot of ocean) and the fact or fiction aspect is kind of up for grabs.

A deep-sea diver has sparked an underwater mystery after discovering a giant skeleton that no one can identify.

Footage taken in 2017 from a remote-operated vehicle (ROV) some 830 metres below sea level shows a large set of bones, including a seemingly intact spinal column measure a massive 30 metres in length. 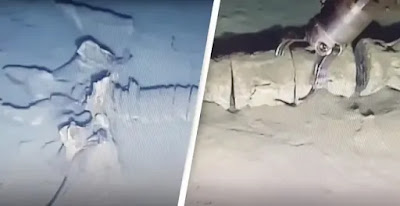 The mysterious skeleton has come to light after the diver operating the underwater robot sent the footage to paranormal researcher Deborah Hatswell, clearly feeling that there could be a spooky explanation behind the bones.

Hatswell says she too has come up empty on the skeleton’s possible origins, and posted the footage to YouTube in the hopes that someone might have some answers.

She told the Daily Star: ‘The dimensions of the skeleton on the video does not fit with the usual size for any sea life in the area. I checked out living sea mammals and came up short of 30 metres. I had a look at the usual suspects – whales, oarfish and sea snakes.’ 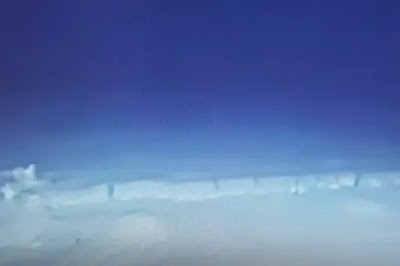 Deborah points out that Oarfish – the longest living bony fish – are only thought to grow up to 8 metres in length, while she claims that the features on the skeleton’s vertebrae don’t match up to what you’d expect to find in the remains of a whale.

The diver who first spotted the mystery remains thinks that based on his previous discoveries, it could have far more ancient origins. ‘The bone could be very ancient,’ they told Deborah in a message, adding ‘I have seen many clay amphora sticking out of the mud and they have been there potentially for 1,000s of years’

It’s a popular theory on YouTube too, with viewers speculating that it could be anything from an ancient undiscovered ‘sea dragon,’ to the fossils of a Tylosaurus. Others have more mundane explanations, suggested it could just be the remains of a decomposed whale or a large hammerhead shark.

So, dear readers, the choice is yours; is it fake, something we already know about, or an as yet undiscovered prehistoric dinosaur. I am inclined to think it's something new as yet to be identified.

See you next week.

Posted by Maritime Maunder at 12:59 PM