11 February 2021: Just over 400 years ago (most of us were either not yet born or very small children!), a small sailing vessel - OK, they were all sailing vessels then - left Plymouth, England for Virginia (where rthere was already a settlement) in the New World. We know they had a rough voyage - leaving in the stormy Autumn to cross the Atlantic almost guaranteed that - and wound up well off course to find land at Cape Cod in Massachusetts. Having been at sea for a tempestuous 66 days, the crew, captain and passengers all agreed that enough was enough and settled in a spot on what became Cape Cod Bay inside the crook of the arm of Cape Cod. The ship, amazing as it seems today, was just 100' long and had a beam of  25'. She carried 102 passengers, 74 men and 28 women of whom 18 were listed as servants. In 1954, Allan Villiers captained a replica which was built in England, across the Atlantic to replicate the original voyage and give the ship to the historic settlement at Plymouth (Plimouth Colony). Now, from CBS News, we learn of yet another milestone voyage, albeit a bit different!

The Mayflower carried some of the first European settlers across the Atlantic Ocean to North America, 400 years ago this year.

To commemorate the anniversary, a  another vessel is recreating that voyage, with the help of artificial intelligence.

“We don’t know how it’s going to go. Is it going to make it across the Atlantic?” software engineer and emerging technology specialist Rosie Lickorish told CBS News’ Roxana Saberi. “Fingers crossed that it does have a successful first voyage.”

The vessel, docked in the harbor of Plymouth, England, will rely on the latest navigation technology when it sets out to sea — but it won’t be carrying a crew or captain.

“We’ve got all sorts of cameras… We’ve got global positioning systems on either side,” robotics expert Brett Phaneuf said. 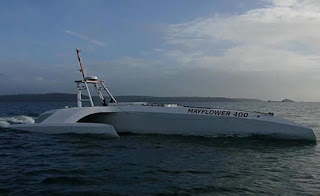 What it won’t have, he said, is “people space.”

Instead the ship will be guided by artificial intelligence designed by IBM.

Phaneuf explained how the technology is supposed to work.

“It looks at its own cameras like eyes, it looks at the radar, it looks at all sorts of other sensors,” he said. “Then it charts its own course and it can deal with unique situations without any human input.”

Those situations include encountering other ships during the voyage — something software engineer Ollie Thompson is working hard to train the ship’s programming to recognize using more than a million different images.

“We’re simulating what she’s seeing,” he said of the boat.

It took the wooden merchant ship 66 days to transport dozens of pilgrims across the Atlantic.

A replica sailed from England to Massachusetts in the 1950s, and is still docked there today.

But Phenauf, who grew up near Plymouth, Massachusetts, wanted to mark the Mayflower’s famous past by looking ahead instead.

“I thought, well, we should build a ship that speaks to the next 400 years. What the marine enterprise will look like then, as opposed to what it looked like 400 years ago,” he said.

An international team turned his vision into the solar-and-wind-powered Mayflower autonomous ship. Its mission is to learn more about Earth’s oceans by gathering data on plastic pollution, warming waters and their effects on marine life.

“It’s very expensive at the moment for scientists actually go out on these research missions,” she said. “So having autonomous vessels like the Mayflower Autonomous Ship is a really important step and kind of actually enabling us to go out to these dangerous places and learn a lot more.”

In addition to cost-saving, not having a crew means the size of the vessel can be compact, and there are no concerns over someone getting sick or hurt.

Brett Phenauf said his biggest worry would be if something broke.

If the boat capsized, the team plans to track it via satellite and salvage it.

And if the unknown voyage succeeds, Phenauf says it would commemorate history while charting a new path.

He said, “I want people to look back on this 400 years from now and think about how different this was from what other people were doing.”

As committed to the classics and historical vessels as we are at Maritime Maunder, this has the earmarks of a monumental and possibly future changing event. We wish them luck and God speed and we will try to keep our readers updated on this epic undertaking.

Posted by Maritime Maunder at 11:59 AM