14 January 2021: They say (please don't ask who "they" are) that the way to find yourself is to sail solo in hairy weather. I think the Southern Ocean qualifies as "hairy" with constant 50-60 knots winds from the West, seas comparable, and no land (except Antarctica) for a zillion miles (well, from Australia to South America). The Vendee Globe Race, a single-handed around the world contest (we posted the early days of the race a month or so back), basically instructs the competitors to sail round the world, leaving Antarctica to starboard, pass the three capes (Good Hope, Leeuwin, and Horn) and return back to the starting point in France. You are on your own with a land crew in France providing radio help but nothing more. Of course, if you get in serious trouble they can dispatch help, but who knows how long it will take to reach you. Rounding the final cape, Cape Horn (bottom of South America) is a celebration-worthy event as the final leg, up the Atlantic to home, is all that remains. Here is the update (as of a few days ago) on the race. 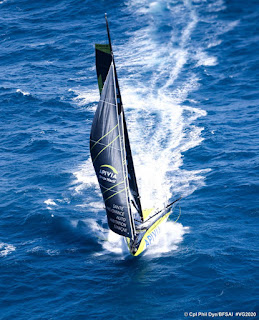 The solo, non-stop and unassisted sailing race around the world—Vendée Globe—is notching into final gears as 14 of 27 boats still in the race have passed the third of three international ‘capes’ on their journey, which began on November 8th last year from the port of Les Sables-d’Olonne in France.

The first sailor to pass Cape Horn was Yannick Bestaven, in the boat Maître Coq IV. This French skipper passed 85 miles south of the cape on January 2nd, having already sailed south of the Cape of Good Hope off South Africa, as well as Australia’s Cape Leeuwin. Cape Horn lies off the southern portion of South America—on Chile’s Tierre del Fuego archipelago—where Atlantic and Pacific oceans meet. Passing Cape Horn provides a psychological edge to sailors: the lonely and often cold, rough expanses of the Southern Ocean have passed, and they are on the last stretch of their arduous journeys.

Forty-eight-year-old Bestaven is now 440 nautical miles ahead of Thomas Ruyant (in the boat LinkedOut), and about 5,000 nautical miles from the finish point back at Les Sables-d’Olonne. Bestaven’s last Vendée Globe attempt was in 2008, when his boat lost its mast within 48 hours of the start of the race. Yet his current lead is never certain, as Bestaven explained.

Overall race weather conditions have been less than favorable during this edition of the event, which takes place every four years. This has likely contributed to Bestaven’s passage of the third cape being eight days slower than the record time set by skipper Armel Le Cléach in 2016.

In their 60-foot long IMOCA class boats, the 27 sailors (down from an original 33 that began the race) are in the process of transitioning from the often-tumultuous Southern Ocean (seas located south of 60 degrees southern latitude, which fringe on Antarctica) to the Atlantic Ocean. The sailors will now enjoy balmier weather as their craft slip northward parallel to the South American eastern seaboard, then eastward to France.

In addition to needing to be on alert 24 hours a day for almost three months, sailors are constantly adjusting for conditions and making repairs. Forty-five-year-old British sailor Pip Hare, for example, just discovered on a routine check of her boat Medallia that her port rudder stock was cracked and close to being useless. Like other sailors, she narrated—holding back tears— that she was ‘devastated.’ Because she expected another 30 knot storm from the south to blast over her on a recent night, her priorities switched from competitively racing to just staying safe and stable until reaching more favorable conditions—where she can replace the rudder.

Such travails are filmed on brief daily video clips available for all to view for free on the internet. These vignettes provide insights into sailing life that were never available to viewers even a decade ago. They provide racing enthusiasts with a better sense of constantly changing physical environments and psychological challenges faced by skippers. They also highlight unexpected joys and fatigue. On the recently passed race day 60, for example, Swiss skipper Alan Roura on the boat La Fabrique laughed while he watched heavy snows lash his boat. Days later, Alexia Barrier of the boat TSE–4MYPLANET explained how even taking an infrequent shower during this race is no simple task: a device trailing in the water—a hydrogenator—transforms movement through ocean waters to electricity which, together with electricity from solar panels, powers a desalinator able to generate three quarts (liters) of fresh water daily. This results in a brief shower splash to wash off accumulated salt and grime.

Sounds like such fun! 90 plus days in full-on survival mode! Guess you either "find yourself" or go full out nuts! We will post for the finish in France in a couple of weeks. As I recall, the last Vendee finishers came in within hours of each other. Probably not going to happen this year. Stay tuned!

Posted by Maritime Maunder at 7:44 AM