1 December 2020: Well, 30 days to go til 2020 comes (grudgingly?) to a halt! Here at Maritime Maunder, we are hoping the next year will be an improvement! During the past month, Florida experienced a couple of storms - well, actually it was the same one bouncing around like a pachinko ball, hitting the state multiple times. During the course of this unpleasantness, a relic from the 1800's surfaced. From CNN, courtesy of both John and Skip White, avid followers of Maritime Maunder and, more importantly, my sons. Thanks guys!

After Tropical Storm Eta swept across northern Florida earlier this month, a beachgoer made a discovery while walking on the shore in St. Augustine.

What Mark O'Donoghue spotted peeking through the sand dunes of Crescent Beach were timbers likely belonging to a shipwreck dating back to the 1800s, according to a news release from the St. Augustine Lighthouse Archaeological Maritime Program.

The program is the work of a team of researchers who have helped to identify several shipwrecks discovered in the area.

Team members have begun inspecting and documenting the findings with the help of college students at Flagler College. They believe the timbers are likely from the Caroline Eddy -- an American merchant ship. But that hasn't been confirmed yet as the team still has months of research ahead.

"Everything we've seen on it so far fits that hypothesis; wooden planking, wood timbers, iron fasteners," Chuck Meide, director of the organization, said in the release. "They look quite similar to other ships from the 1800s that we have seen." 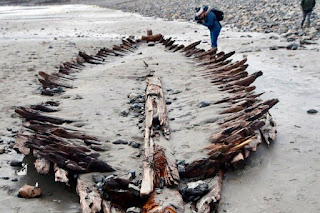 Hurricane Eta, the 28th named storm of the 2020 hurricane season, left a trail of destruction that spanned several countries early this month when the storm made four separate landfalls. On November 3, Eta made landfall in Central America as a Category 4 hurricane. It re-entered the Caribbean Sea and slammed into Cuba on November 8 and then into Florida's Lower Matecumbe Key as a tropical storm.

Eta then moved into the Gulf of Mexico and made its second Florida landfall on November 12, just south of Cedar Key, roughly a 130-mile drive northwest of Tampa. The storm swept across northern Florida and moved out into the Atlantic Ocean.

In St. Augustine, the storm caused extreme high tides with some coastal flooding and beach erosion at Fort Matanzas National Monument, according to the National Park Service. The erosion led to the discovery of the shipwreck that researchers think might be the remains of the Caroline Eddy. 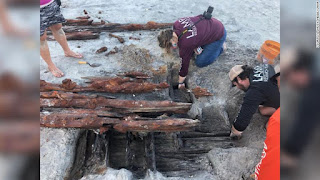 "In late August 1880 the Caroline Eddy left Fernandina bound for New York with a cargo of lumber," according to a Facebook post from the NPS. "She sailed into a hurricane, was driven south and went ashore near Matanzas. Her crew survived after clinging to the rigging for two days and a night."

Meide told CNN that they are at the beginning of their research, but at this moment the clues line up that it might be that wreckage. 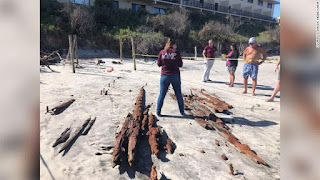 "We haven't found any other candidates as strong as Carolina Eddy," he said.

The sand around the wreckage has been eroding away for years, especially after Hurricane Matthew and Irma, he said, and the dunes used to be 12 feet higher. The sand has helped to preserve the wooden structure.

"The wood is in really good shape," Meide said. "The sand kept it covered from air and sun."

Over 70% of all known historic shipwrecks lost in Florida are merchant vessels that were moving goods from one port to another along the Atlantic coast, according to the researchers.

"Florida's maritime past is America's story as the nation's oldest port dating back to the Spanish landing in 1565," said Kathy Fleming, executive director of the St. Augustine Lighthouse and Maritime Museum, in the release.

"The St. Augustine Lighthouse Archaeological Maritime Program is committed to saving our maritime history and passing these stories on to our future generations."

The research team is continuing to document and take samples of the timbers and iron work. Due to the high cost of excavation, the wreckage will not be completely excavated, Meide said. To preserve the site, the county has roped off the area and posted signs to warn visitors to not disturb the area. The St. Augustine Lighthouse Archaeological Maritime Program is in the process of getting a permit from the state for a more permanent barrier, Meide said.

"The shipwreck is a living museum," he said. "It's great to see there is so much interest in it."

While he encourages people to take pictures and ask an archeologist on site questions, he warns that it is illegal to disturb the site.

"It is a protected archeology site," he said. "We wouldn't want everyone to dig it up or break off pieces of it."

Meide added that there isn't any treasure buried with the ship and that anything of value was most likely stripped from it back in the 1800s.

So, can they prove it's the Caroline Eddy? I would think it will next to impossible to conclusively prove it, but the folks working on this are able to do amazing things and just may be able to identify the wreck with certainty. If more surfaces, we'll let you know.