18 October 2020: Maritime Maunder is not always known for posting "current" news - often deferring to historical events of interest. However, there are times when something happens in the recent past (like this week) which merits attention. Last week, we offered news about the salvage of the grounded car carrier in Georgia being delayed and today, something to report which in and of itself is not news ordinarily (except to those affected by it), but there is a history lesson - two actually - involved which triggers this post. From THE WARZONE, online, the following:

Last month, the U.S. Navy's Arleigh Burke class destroyer USS Kidd returned to its homeport flying a huge Jolly Roger pirate flag, something the ship is uniquely authorized to do for reasons you can read about in this subsequent War Zone piece. Earlier this week, another destroyer in this class, the USS Paul Hamilton, finished up its latest deployment flying a large blue flag with a crescent moon with the word "LIBERTY" written inside, as well as a very long pennant with a stars-and-stripes motif, both of which have their own fascinating backstories. 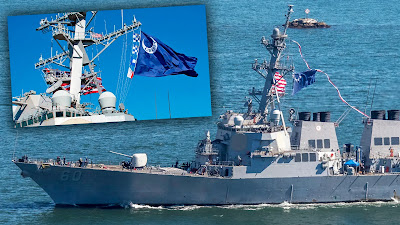 Paul Hamilton, also known by its hull number DDG-60, returned to Naval Base San Diego in California on Oct. 13, 2020. The ship had left its homeport in January and spent some nine months at sea, primarily in the Middle East and Western Pacific, traveling approximately 54,422 nautical miles, in total, according to the Navy.

The ship originally left port as part of the Theodore Roosevelt Carrier Strike Group (CSG), which was tasked with conducting operations in the Western Pacific. The destroyer was detached from that CSG after the crew of the Nimitz class aircraft carrier USS Theodore Roosevelt became stricken with an outbreak of the COVID-19 novel coronavirus, which forced the flattop to head for an extended stay in port in Guam. 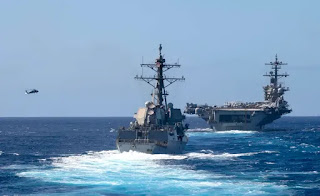 Paul Hamilton subsequently conducted other operations in the Pacific region, including in the contested South China Sea, before moving on to the Middle East. There it served for a time as the 5th Fleet Ballistic Missile Defense Commander and in the support of the International Maritime Security Construct aimed at deterring Iran.

The Navy says the destroyer spent time attached to four different carrier groups, in total, throughout the course of the deployment to these two regions, but did not identify any beyond the Theodore Roosevelt CSG.

“I could not be more proud of this crew and the great work they did in support of American interests in two strategic regions," Navy Commander Mark Lawrence, the Paul Hamilton’s commanding officer, said in a statement. The crew "adapted to the challenges of operating in a COVID environment and performed brilliantly, demonstrating remarkable self-sufficiency and the will to fight that our nation expects from its Navy."

By the time the ship returned to San Diego, it had spent exactly 270 days, or nine months, away from home, which brings us to the long-flowing pennant that it was flying. Navy ships are authorized to hoist this streamer, known as the "Homeward-Bound Pennant," after spending that amount of time, or more, deployed.

The U.S. Navy inherited this tradition from the British Royal Navy. Historically British crews returning from long voyages would fly long streamers to celebrate that they were heading for their "paying off," meaning that were headed home, at which time they would receive their wages.

The practice of flying these pennants continued among American ships unofficially through World War II, after which the Navy formally added it to the service's regulations and defined rules for when and how the streamers could be displayed. An online copy of one Navy manual lays out these stipulations:

"The homeward-bound pennant is flown by ships returning from extended overseas tours. The pennant is authorized for display by a ship that has been on duty outside the limits of the United States continuously for at least 9 months. It is hoisted on getting under way for the United States and may be flown until sunset on the day of arrival in a port of destination. The pennant is similar to the commission pennant, but instead of the usual seven stars, there is one star for the first 9 months of overseas duty and one star for each additional 6 months. Total length of the pennant customarily is 1 foot for each officer and enlisted crew member who served overseas for a period in excess of 9 months. When the number of personnel produces an unwieldy pennant, the length of the pennant is restricted to the length of the ship."

"Upon arrival in a port of the United States, the blue portion containing the stars is presented to the commanding officer. The remainder of the pennant is divided equally among the officers and enlisted crew."

This is actually not the first time Paul Hamilton has flown the Homeward-Bound Pennant. The ship's crew has raised it at least twice before, in 2003 and in 2013, after deployments lasting 10 months and a little over nine months, respectively.

But when the Paul Hamilton entered the Port of San Diego this time, she was also flying the previously-mentioned large blue flag with crescent moon containing the word "LIBERTY." This is known as the Moultrie Flag or Liberty flag and traces its roots to the American Revolutionary War. Colonel William Moultrie, a South Carolinian and head of the 2nd South Carolina Regiment of the Continental Army, had the banner made up in 1775.

His troops prominently flew the flag during the Battle of Sullivan's Island in 1776, where revolutionary forces held their ground against the Royal Navy's attempt to dislodge them, an action that is credited with saving the state's nearby capital, Charleston, from being captured by British Forces. Moultrie went on to lead continental troops in other successful engagements with the British until his capture in 1780.

While in captivity, he rejected attempts by the British to turn him to their side and was eventually released in a prisoner exchange in 1782. After the revolutionary war, he became a notable politician in South Carolina's early history. His flag became the basis for the official South Carolina state flag.
The Paul Hamilton's namesake was another South Carolinian who served in the Revolutionary War and went on to become the third Secretary of the Navy, as well as a notable politician in his own right.

Pretty interesting history we think and hope you agree. Next week, we'll probably go back to the 18th Century for your reading pleasure!

Posted by Maritime Maunder at 12:55 PM