IN AND OUT MAINE SHIP SKELETON IDENTIFIED

11 April 2020: I realize it has been longer than a week since we last posted; sorry about that, but being involved in "sheltering in place" causes one to barely know what month it is, let alone what day of the week we're on! The days seem to run together in some random order with little to distinguish one from another. But enough about that - we hope you all are safe and staying home and away from nasty places where you could pick up this virus. Hopefully in another few weeks it will be a thing of of the past.

Today we're bringing you an interesting (we thought) story from Maine (in the US) about a pre-Revolutionary War vessel - well, the skeleton of one - that periodically shows up on a beach in York. From Archeology Online:
~~~~~~~~~~~


YORK, MAINE—Researcher Stefan Claesson has determined that the remains of a ship that periodically appear in the shifting sands of southern Maine date to the mid-eighteenth century, according to a Seacoast Online report. 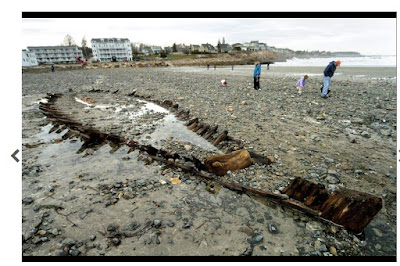 The hull currently measures about 50 feet long, but Claesson thinks the narrow vessel was about 60 feet long when it was built. “I believe it is the sloop Defiance,” Claesson said. “I think the ship is a pink, a type of cargo ship.”

Claesson said he mapped the site with a drone and geographic information system technology. Wood samples analyzed by the Cornell University Tree-Ring Laboratory were found to be from trees cut down in 1753. Using that information as a starting point, Claesson then examined notary records kept by Daniel Moulton between 1750 and 1794, and found that the Defiance ran aground in Cape Neddick Cove in 1769. “Defiance fit every description,” he explained. 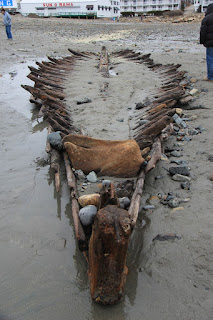 Additional research revealed that on its last journey, the Defiance left Salem, Massachusetts, and was headed for Portland, Maine’s Casco Bay, carrying a crew of four, flour, pork, and other supplies when it hit rocks in Cape Neddick Cove during a storm. The crew survived, but the ship was lost. Claesson has also recommended procedures to protect the wreckage from further damage.

Claesson told selectmen the Maine Historic Preservation Commission recorded the site as a significant historical find, and that the ship would qualify for the National Registry of Historic Places. Examples of pre-revolutionary ship-building are rare, he said.

“There’s so much we can still learn from the site,” Claesson said.
In terms of conservation, Claesson suggested the wreck remain where it is, but that certain measures be enacted to help educate the public.
“I suggested a rapid-response team of local volunteers who could cordon the site and educate the public so that nobody climbs on it or takes anything,” he said.
“There is the possibility for a FEMA grant pre-disaster mitigation to document the site, and to potentially put more protective measures like sand-bagging, or netting down to help preserve it,” Claesson said.
Claesson said the ship has captured the fascination of the York community for decades.

″‘Was it a viking ship? Was it from the Revolutionary war?’ People had so many ideas about its origin,” he said.

Claesson said he had records of the wreck’s unearthing in 1958 and 1978.
“Photos taken during that time indicate the mast was cut off,” he said.

“I’m not trying to be the archaeology police,” he joked. “But people have been interacting with the site for decades. I’d love to see photos or learn anything else about it to be able to tell the full story of the site.”
~~~~~~~~~~~~~~~~~~

That will do it for this one. To those readers who celebrate it, we wish you a happy Easter and Passover. See you next week (if we recognize that a week has passed!)

Until next time, stay safe and if you go outside or into locations with other people, hold your breath!

Fair Winds,
Old Salt
Posted by Maritime Maunder at 9:35 AM