3 March 2019: Well, here we are all of a sudden in March with snow storms wreaking havoc on North America (northern North America; here in winter quarters it was 85 F today and quit pleasant...). Last week, we talked about the still submerged wreck of HMS Victory (the original one) and this week, we are reprising, with an update, a post from 2 August 2016 about the abandoned ships hidden under the streets of San Francisco, California.
~~~~~~~~~~~~~~~~

While San Francisco is a famous, beloved and popular tourist destination for countless reasons, many may not realise that hidden beneath the hilly surface of the Northern California city, lie dozens of 19th century shipwrecks.

During the gold rush days (1850's) people descended on San Francisco to trudge north to the newly discovered gold fields and try their luck...and when I say "people" - I mean over 62,000 of them in the course of a year! They got there by ship, of course, as that was pretty much the only way. And some would go home that way - some rich and some totally broke. And some would not go home at all ... for a variety of reasons.

When the ships, fast clipper ships as well as the slower (and cheaper) ships, docked in San Francisco, not only did the passengers disembark in their zeal to get to the gold fields, but often so did the crew, leaving the ships to rot at the dock. As San Francisco grew, more ground space was needed to build on and so the waterfront got filled in, often using the rotting hulls as base for the fill and sometimes as foundations for new buildings. So today, when a construction project begins, the workers frequently find the remains of a 19th century ship in the hole or under a demolished building. 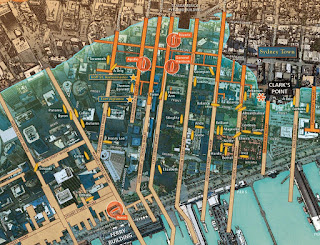 A new map has been created which shows the location of hidden, forgotten San Francisco shipwrecks. Thanks to the San Francisco Maritime National Historical Park, the map, first created (and last updated) in 1963, has been updated for the first time ever.
Looking at the maps, one can see the original coast line as well as the "new" land which added to the city. 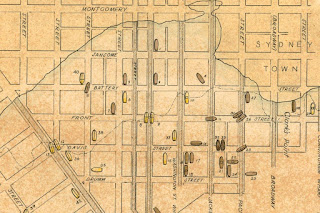 The original map in 1962 marked “Sydney Town”, named after the many Australians who arrived to find gold.
The maps have also been instrumental in providing vital detail to the history of the city; for example, researchers found remains of six ships that were destroyed in a fire in 1851. The deliberate fire was reportedly crafted by Charles Hare, a man who had employed Chinese labourers to strip the old ships for their brass, bronze and scrap wood to sell. Other artefacts, including Galapagos tortoise bones, have also been found along the way. 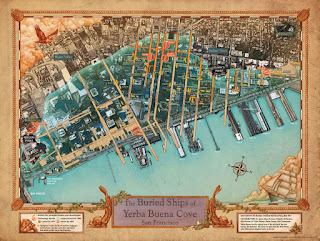 The map is currently being finalized, after which it will be on display at the San Francisco Maritime National Historical Park.

So, the next time you are wandering about in San Francisco, think about the fact that you might be treading on the remains of a 19th century ship, deteriorating under the very streets.

Posted by Maritime Maunder at 12:21 PM