4 November 2018: As promised in our last posting, no wrecks today! In fact here is the cutting edge of scientific technology - water based - (we are a Maritime blog, after all!) and something that might help humanity. Courtesy of NOAA, we offer the following piece.
~~~~~~~~~~~~~~~


NOAA and Saildrone, Inc. launched [last spring - ed] the first batch of 11 unmanned sailing vehicles  as part of NOAA’s expanding use of the cutting-edge technology to advance fisheries, weather and climate science.
Saildrones powered by wind and the sun’s rays, have traveled about 50,000 miles on NOAA missions — about twice the distance it takes to circumnavigate the earth — since the partnership began in 2014. Each year, Saildrone Inc. refines these vehicles for data collection with NOAA scientists who have helped integrate 18 sensors into the drone. These sensors are capable of collecting measurements such as air and water temperature, wave height, salinity, carbon dioxide concentration, fish abundance and the presence of marine mammals.

“The saildrone is an amazing device and provides us with an array of information, in some cases information that hasn't been readily available,” said Jessica Cross, NOAA oceanographer who is using the saildrone to study how the Arctic Ocean is absorbing carbon dioxide and becoming more acidic. “Last summer, two saildrones journeyed north through the Bering Strait for the first time. We’re headed back to the Arctic this summer to learn more about rapid environmental changes occurring here.” 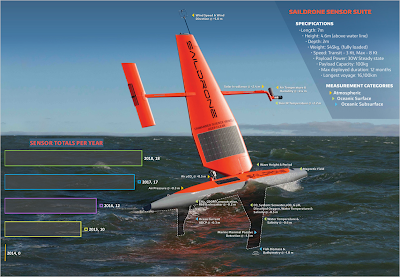 What can saildrones do for science? Here are three missions taking place this year:

1. Gain a better understanding of West Coast fisheries
New this year will be fish acoustic surveys using saildrones in waters from Vancouver Island, Canada, to San Diego, California. NOAA Fisheries will launch five saildrones to gather essential data on fish populations, including sardines, anchovies and hake, one of the most valuable fisheries on the West Coast. Four of these saildrones will duplicate the path of NOAA Ship Reuben Lasker to compare data taken by a sensor that uses sound waves that bounce off the backs of fish to record the abundance of fish, and test whether saildrones can help improve the efficiency and accuracy of fish stock estimates. These estimates are used to make decisions on fishing rules and limits.
2. Monitor change in the Arctic
Four saildrones will leave from Dutch Harbor, Alaska, for the Chukchi Sea to study the effects of ocean acidification on marine species as well as the distribution of Arctic cod. Arctic cod is a major food for seabirds, ringed seals, narwhals, belugas and other fish.
“We are trying to unravel the puzzle of what happens to young Arctic cod that are so abundant in the summer on the Chukchi Sea shelf but then mature into comparatively few adult fish by the next year,” says Alex De Robertis, NOAA Fisheries biologist.
3. Track weather in the tropical Pacific
Two saildrones will glide 2,000 miles to the tropical Pacific Ocean in September to survey ocean and atmospheric data, including changes in ocean temperature and ocean carbon dioxide concentrations. Collecting data in the area of the Tropical Pacific Observing System (TPOS) of moorings, saildrones will provide high-resolution data that augments our understanding of how the weather-maker called El Niño develops in this region. The saildrone research is part of the broader effort to advance TPOS, which is our nation’s early warning system for El Niño and underpins U.S. weather forecasting.
~~~~~~~~~~~~~~~~

Now that is "human helping technology" in our opinion. And as with so much, help from the sea. Hope you enjoyed this. As more is released by NOAA, we will try to update this story.

Posted by Maritime Maunder at 6:18 PM