13 April 2018: Well, once again, it's the 13th of the month, and it happens to be on a Friday here in the USA. While superstitions abound regarding the date, many, if not all, derive from the maritime world. Following is a listing of 13 of the more common ones; you chose your favorite! 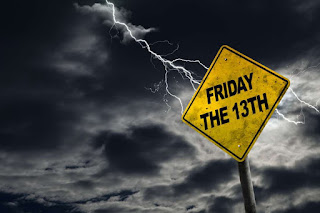 Sailing superstitions have long been passed along by word of mouth or have been mentioned time and again in movies and books. Following are 13 superstitions that occasionally still find mention amongst sailors today.

1. Whistling: Whistling on board a sailing ship is thought to encourage the wind strength to increase and on ships where whistling was taboo, the cook was usually excused because as long as they were whistling, they were not stealing the food.


2. Jonah: A “Jonah” is a long-established expression amongst sailors, meaning a person (either a sailor or a passenger) who is bad luck. This is based on the Biblical prophet Jonah and this concept is prominent in the film Master and Commander: The Far Side of the World.
3. Unlucky days: The most enduring sailing superstition is that it is unlucky to begin a voyage or ‘set sail’ on a Friday. The Late Admiral W.H. Smyth in his book ‘The Sailor’s Word-Book‘ described Friday as “The Dies Infaustus, on which old seamen were desirous of not getting under weigh, as ill-omened.” (Dies Infaustus means “unlucky day”)
This superstition is the root of the well known urban legend of HMS Friday. The details of the story vary, but this is the most popular variant around: Sometime in the 19th century, the Royal Navy attempted to finally dispel the old superstition among sailors that beginning a voyage on a Friday was certain to bring bad luck. 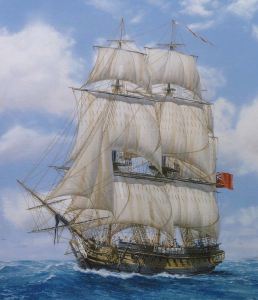 To demonstrate the falseness of this belief, they decided to commission a ship named HMS Friday. Her keel was laid on a Friday, she was launched on a Friday, and she set sail on her maiden voyage on Friday the 13th, under the command of a Captain James Friday. She was never seen or heard from again. This is an urban legend as there never has been a ship named HMS Friday on record.
Friday also earned it’s ill-repute as it was the day Jesus was crucified. The other days considered ill-fated to sail on in different parts of the world were Thursdays (God of Storms, Thor’s day), the first Monday in April (the day Cain killed Abel), the second Monday in August (the day Sodom and Gomorrah were destroyed), and 31 December (the day on which Judas Iscariot hanged himself).
In the 18th century New England, rolling clouds and roaring waves were thought as bad omens, so sailing on days under such conditions was considered inadvisable.
4. Salt: It was considered bad luck for a sailor to pass the salt directly to another. Presumably, he could put it down and the other sailor could pick it up. If you were to spill some salt, then you would have to toss some salt over your left shoulder, where the devil traditionally sits. 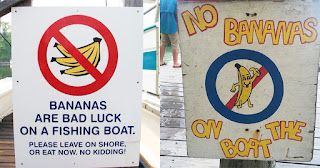 5. Bananas: No bananas onboard. They were believed to be so unlucky that they would cause the ship to be lost. Whole cargoes of bananas were especially frightening for sailors.

6. Flat-footed people and redheads: Flat-footed people were to be avoided at all costs. It is believed the superstition arose from them being unable to climb the masts. Redheads were considered bad luck and the bad luck could be avoided only if you spoke to them first before they spoke to you.
7. Looking back: Apparently looking back once the ship leaves port implies you are not truly ready to brave the seas and complete the voyage.
8. Unlucky words: Saying the words ‘drowned’. ‘goodbye’ or ‘good luck’ was considered to bring bad luck.
9. Stones: Throwing stones into the sea was seen as a sign of disrespect ensuring retaliation in the form of stormy seas.


10. Hat: Losing your hat overboard was considered akin to making the voyage a long one.
11. Seagulls: Seagulls were believed to be possessed by the spirits of sailors who died while at sea and killing a seagull would bring ill-fortune upon the ship by the spirit. [Albatross also - ed.]
12. Personal grooming: Unhygienic as it would lead to being, cutting your hair or nails was considered bad luck as these were normally considered as offerings to Prosperina and Neptune was believed to be jealous if one were to make such offerings while in his kingdom.
13. And last but not the least, Women: Women were considered bad luck onboard as they would distract the crew, which would anger the sea and thus cause treacherous conditions in revenge. Of course, there was also the belief that you should never name your ship after the woman you are engaged to as the ship would be jealous and never let you have peace. Though it is usually seen to be the other way around.

One of my personal favorites is the superstition about never paint your boat green- too reminiscent of the shore and perhaps the color will draw you (and the boat back to it - usually on a shoal!) Changing the name of a boat is reputed to bring bad luck as well.

So - if any of you leave port on a Friday, in a green boat, whose name has been changed, carrying a bunch of bananas, after saying "good bye" to your red-haired sweetheart, send us a message if you make it back to port safely!


Posted by Maritime Maunder at 1:11 PM