28 October 2017: After World War I ended, the German Navy surrendered and many of its ships were interned at the Royal Navy's chief naval base at Scapa Flow in the Orkney Islands north of the Scottish mainland. The German submarine U-118, however, was destined for France to be broken up for scrap. While she was being towed, a fierce gale snapped the cable and she ended up like a gigantic beached whale washed ashore on Hasting's Beach, in front of Hasting's finest hotels. 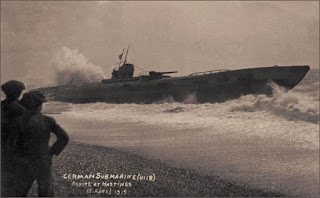 SM U-118 was one of nine huge ocean-going mine laying submarines. Launched on February 23, 1918, she was 267 feet long, displaced 1,200 tons and was armed with a 150mm deck gun, 14 torpedoes and 42 mines. SM U-118 had a lackluster career, sinking only two ships, one just off Ireland's north coast and the other northwest of Spain. She was surrendered to the Allies on February 23, 1919, exactly one year after she was launched. While being towed to France through the English Channel in rough seas, U-118 broke free. Despite attempts by a French destroyer to break her up, she ended up aground on the beach in the middle of the city of Hastings on the Sussex coast in southern England on April 15, just in time for the Easter Holiday. 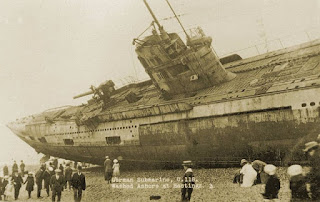 The stranding caused a sensation. Thousands of people flocked to see this monster that had washed ashore, it's true size evident from the aerial view taken shortly after the beaching. 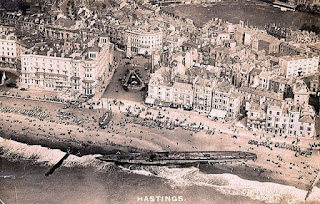 Three tractors tried to drag it back to the sea, but failed. At that point, the city fathers decided to make the best of this instant tourist attraction. The Admiralty put the local coast guard in charge and allowed the town clerk to charge sixpence apiece to visitors wishing to climb onto the deck of U-118. After two weeks, nearly £300 (UK£ 13,200 in 2017) had been raised for the Mayor's Fund for the welcome home of troops planned for later that year. 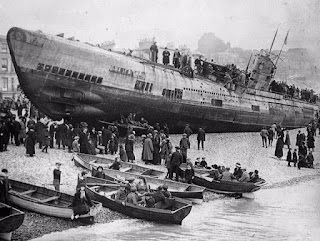 Two members of the coast guard, chief boatman William Heard and chief officer W. Moore, showed important visitors around the interior of the submarine. The visits were curtailed in late April, when both coast guard men became severely ill. Rotting food on board was thought to be the cause, however, the men's condition continued and got worse. Moore died in December 1919, followed by Heard in February 1920. An inquest decided that a noxious gas, possibly chlorine released from the submarine's damaged batteries, had caused abscesses on the men's lungs and brain.

Although visits inside the submarine had stopped, tourists still came to take be photographed alongside or on the U-boat's deck. Finally, between October and December 1919, U-118 was broken up and sold for scrap. The deck gun was left behind, but was removed in 1921. Some of the ship's keel may yet remain buried in the beach sand. 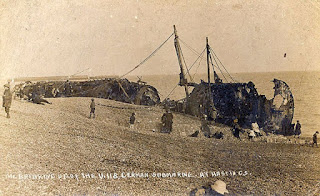 So the city fathers turned a potential disaster and problem to their advantage, making a few quid in the process! That's taking an opportunity and turning it to a winner! Well done, Hastings!