20 January 2017: Well, it's official - no, not that the United States has a new president (we do, but that's not what we're writing about today!); this is a continuation of the Vendee Globe post from last time. When we posted about the potential close finish of the Vendee Globe race around the world (16 Jan) we indicated we would announce the finish if possible. Well, it is possible and here we are (courtesy of Sail Magazine):

Le Cléac’h’s time sets a new record for the race, beating the previous record of 78 days 2 hours 16 minutes set by French sailor Francois Gabart in the 2012-13 edition by 3 days, 22 hours and 41 minutes. 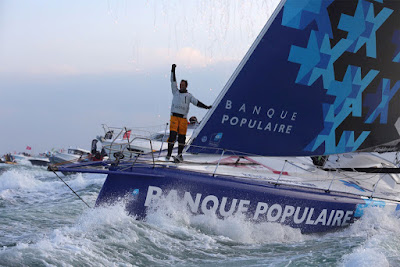 Le Cléac’h, the runner-up in the 2008-09 and 2012-13 editions of the Vendée Globe, completed the 24,499-nautical-mile course at an average speed of 13.77 knots, which began on November 6 last year when 29 boats set out from Les Sables d’Olonne on a sunny day with a perfect sailing breeze.

“My feeling is that this is a dream come true,” Le Cleac’h said after crossing the finish line. “I hoped to win this race 10 years ago but I finished second. Today is a perfect day. My team has been amazing they’re the dream team, and this is their day too. I’m very happy for Alex, it’s a great second place. It has been very difficult with him behind me, he gave me a really hard time in this Vendee Globe.”

The following is from the official Vendee Globe site:


"This morning (20 Jan: ed.) it was Alex Thomson’s turn for celebration as the British sailor closed the loop on his epic Vendée Globe performance. Despite pushing himself and his boat almost to the limits of breaking he was unable to catch the overall winner Armel Le Cléac’h, but you can’t say that he didn’t try. In the last few days he closed the gap from more than a 700 mile deficit, to just over 30 miles setting a new 24-hour, single-handed distance record along the way. He should be beyond proud of his accomplishment in becoming the second non-French person to occupy second place since Ellen MacArthur in 2001." 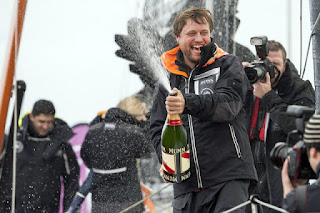 Since the race began on 6 November, these intrepid sailors have put over 24,000 miles under their keels and it is astonishing - at least to me - that they should finish this close together.... well done, lads! A personal observation, if I may: it must have been heart-breaking for England's Alex Thompson to be kept from the top spot by broken equipment and fickle winds.

And there you have it. The other vessels are far enough behind that their finishes will likely be of little interest except to them and their supporters...

That's all for now. See you next time.
Fair Winds,
Old Salt