22 September 2016: Saw this quite interesting article written by Melissa Hobson this morning and thought it would interest many of our readers. I witnessed, a few years back, the sinking of a former US Navy ship off the beach in Grand Cayman and subsequently dove the wreck (It wasn't a wreck - it was in pristine shape, just "cleaned up" so as to prevent ecological damage). It is quite a sight to watch a ship do down, and at the event I mentioned above, there were huge throngs of spectators, both on the beach and on boats around the site. Here's a video of another ship being sunk (July 2016) to make a reef for recreational divers off the coast of Florida (click the name below):

Now, here's the article by Ms. Hobson (lightly edited) I mentioned earlier. I hope you will enjoy reading it and seeing some of the wonderful images included.


"Since I qualified as a diver nearly 10 years ago, I’ve been lucky enough to see more incredible marine life than I can name – from finding a turtle resting under some coral on my first ever night dive in the Great Barrier Reef to coming eyeball to eyeball with grisly-looking ragged tooth sharks in South Africa.


As well as the fascinating creatures you might spot on a dive, the non-living things can be a huge draw for divers too. Namely: shipwrecks – after some time underwater they gradually begin to deteriorate. The wreck becomes both a historical capsule frozen in time (with artefacts that went down with the ship – such as tools, maps in cabinets or medicine packets – still identifiable) and a diver’s underwater playground that changes over time and blends in with the marine habitat as it deteriorates and coral grows over it.


According to the United Nations, there are over three million wrecks at the bottom of the ocean. Thousands of these are popular scuba diving sites and many of those in shallower waters (such as the Liberty Shipwreck in Tulamben, Bali) can also be visited by snorkelers. 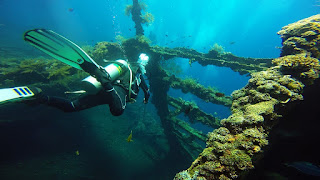 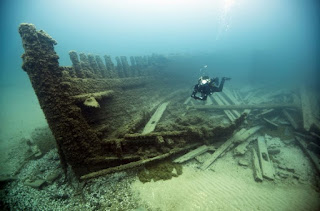 "There are many ways in which a ship might have come to its final resting place on the seabed. By their nature, many wrecks will have been victim to a misfortunate incident: an accident or collision, a storm, warfare, piracy or just human error. Only last month I visited the wreck of the MV Christina with Scuba Safaris in Nevis – a passenger ferry that tragically sank on the crossing from St Kitts and has been preserved as a memorial site. Chillingly, some human remains are still visible as not all the bodies could be recovered from the wreckage.
"Yet, not all shipwrecks sink as a result of an accident or misfortune – many are put there on purpose. A recent example is the Ana Cecilia: a 170-foot cargo ship was sunk in Palm Beaches on 13 July 2016. She was once used to smuggle drugs into America and was seized when an investigation discovered more than $10 million of cocaine on board.

"Just ten days after the scuttling of the Ana Cecelia (video above) to make for an ecotourism attraction, another new diving attraction was created in Greater Fort Lauderdale: on 23 July 2016, a 324-foot environmental tanker, Lady Luck, became the latest addition to be sunk at The Shipwreck Park in Florida. Image below. 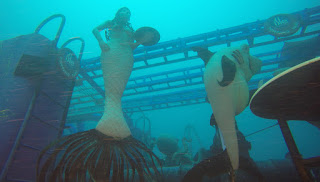 The underwater ‘cultural arts park’ is already home to 16 other wrecks but Lady Luck will be a special attraction: as well as exploring the captain’s deck, engine room and 16 staterooms, divers will be able to see the work of renowned local artist Dennis MacDonald, including a faux casino, on the deck. Lady Luck is expected to boost tourism to the area by attracting 35,000 divers each year."


Hope you enjoyed this. Until next time,
Fair Winds,
Old Salt
Posted by Maritime Maunder at 7:57 AM