10 December 2015: We have written maybe a couple of posts about the new Zumwalt class of destroyers. Well, the first of three (originally planned to have 23 but, well, budget restraints and so forth....) has been launched and the Navy is touting the radical new design, propulsion, and armament she boasts. She headed to sea this week for initial sea trials from Bath Iron Works in Maine and the expectations for this radical ship are high. Here's what she looks like: 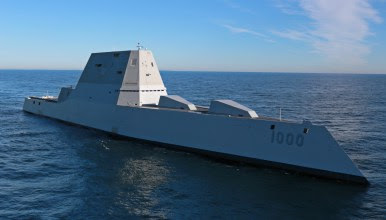 Her capabilities are quite extraordinary, and include self-guided projectiles (with a range of 60+ miles!) from her deck guns, missiles, helicopter capabilities and a turbo-electric power plant capable of pretty decent speeds. 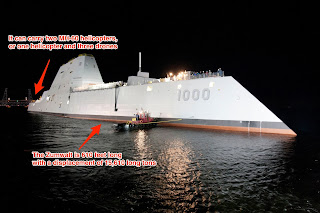 ﻿
In the video below of the ship underway, you might note that she make very little wake, in keeping with her stealth qualities - she supposedly presents a radar image about the size of a small fishing boat!
USS ZUMWALT underway (please pardon the opening advertisement - you know how that works!)
Now, is this design completely new? Something REALLY radical? Sure her capabilities, stealth, and weapons are - but what about the design? Maybe not so much!
Looks kinda familiar, doesn't it!
And as a final note, MARITIME MAUNDER has reached 10,000 readers! Thank you all who check the blog and I hope you get some pleasure from our posts!
Until next time,
Fair Winds,
Old Salt
Posted by Maritime Maunder at 7:39 AM