10 September 2015: On this date, 1813, Commodore Oliver Hazard Perry came to fame when through his skill, determination, and courage he successfully removed the British threat from Lake Erie. Here is a splendid description from Miitary History:

Following the fall of Detroit in August 1812, the British took control of Lake Erie.


In an attempt to regain naval superiority on the lake, the US Navy began construction of two 20-gun brigs at Presque Isle, PA (Erie, PA). Designed by New York shipbuilder Noah Brown, these vessels were intended to be the foundation of the new American fleet. In March 1813, the new commander of American naval forces on Lake Erie, Master Commandant Oliver H. Perry, arrived at Presque Isle. Assessing his command, he found that there was a general shortage of supplies and men.
While diligently overseeing the construction of the two brigs, named USS Lawrence and USS Niagara, Perry traveled to Lake Ontario in May 1813, to secure additional seamen from Commodore Isaac Chauncey. While there, he participated in the Battle of Fort George (May 25-27), and collected several gunboats for use on Lake Erie. Departing from Black Rock, he was nearly intercepted by the new British commander on Lake Erie, Commander Robert H. Barclay. A veteran of Trafalgar, Barclay had arrived at the British base of Amherstburg, Ontario on June 10.

After reconnoitering Presque Isle, Barclay focused his efforts on completing the 19-gun ship HMS Detroit which was under construction at Amherstburg. As with his American counterpart, Barclay was hampered by a perilous supply situation. Convinced that construction of Detroit was on target, he departed with his fleet and began a blockade of Presque Isle. This British presence prevented Perry from moving Niagara and Lawrence over the harbor's sand bar. Finally, on July 29, Barclay was forced to depart due to low supplies. Taking advantage, Perry moved his ships out of the harbor.

Returning four days later, Barclay found that Perry's fleet had cleared the bar. Out-gunned, he withdrew to await the completion of Detroit. With his two brigs ready for service, Perry took control of the lake. From this position, he was able to prevent supplies from reaching Amherstburg. As a result, Barclay was forced to seek battle in early September. Sailing from his base, he flew his flag from the recently completed Detroit, and was joined by HMS Queen Charlotte (13), HMS Lady Prevost (13), HMS Hunter (10), HMS Little Belt (3), and HMS Chippawa (1).
Perry countered with Lawrence (20), Niagara (20), USS Ariel (4), USS Caledonia (3), USS Scorpion (2), USS Somers (2), USS Porcupine (1), USS Tigress (1), and USS Trippe (1). Commanding from Lawrence, Perry's ships sailed under a blue battle flag emblazoned with Captain James Lawrence's immortal command, "Don't Give Up the Ship." Departing Put-in-Bay (OH) harbor at 7:00 AM on September 10, 1813, Perry placed Ariel and Scorpion at the head of his line, followed by Lawrence, Caledonia, and Niagara. The remaining gunboats trailed to the rear. 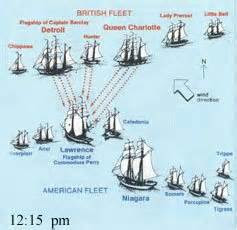 As the principal armament of his brigs was short-range carronades, Perry intended to close on Detroit with Lawrence while Lieutenant Jesse Elliot, commanding Niagara, attacked Queen Charlotte. As the two fleets sighted each other, the wind favored the British. This soon changed as it began to lightly blow from the southeast benefiting Perry. With the American's slowly closing on his ships, Barclay opened the battle at 11:45 AM with a long-range shot from Detroit. For the next thirty minutes, the two fleets exchanged shots, with the British getting the better of the action.

Finally at 12:15, Perry was in position to open fire with Lawrence's carronades. As his guns began pummeling the British ships, he was surprised to see Niagara slowing rather than moving to engage Queen Charlotte. Elliot's decision not to attack may have been the result of Caledonia shortening sail and blocking his path. Regardless, his delay in bringing Niagara allowed the British to focus their fire on Lawrence. Though Perry's gun crews inflicted heavy damage on the British, they were soon overwhelmed and Lawrence suffered 80% casualties. 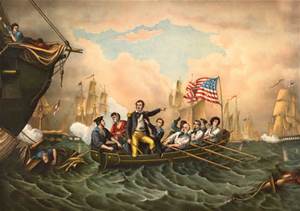 With the battle hanging by a thread, Perry ordered a boat lowered and transferred his flag to Niagara. After ordering Elliot to row back and hasten the American gunboats which had fallen behind, Perry sailed the undamaged brig in to the fray. Aboard the British ships, casualties had been heavy with most of the senior officers wounded or killed. Among those hit was Barclay who was wounded in the right arm. As Niagara approached, the British attempted to wear ship (turn their vessels). During this maneuver, Detroit and Queen Charlotte collided and became entangled. Surging through Barclay's line, Perry pounded the helpless ships. Around 3:00, aided by the arriving gunboats, Niagara was able to compel the British ships to surrender.

When the smoke settled, Perry had captured the entire British squadron and secured American control of Lake Erie. Writing to General William Henry Harrison, Perry reported "We have met the enemy and they are ours." American casualties in the battle were 27 dead and 96 wounded. British losses numbered 41 dead, 93 wounded, and 306 captured. Following the victory, Perry ferried Harrison's Army of the Northwest to Detroit where it began its advance into Canada. This campaign culminated in the American victory at the Battle of the Thames on October 5, 1813. To this day, no conclusive explanation has been given as to why Elliot delayed in entering the battle. This action led to a life-long dispute between Perry and his subordinate.

So, that was the story of the Battle of Lake Erie - a chapter in the War of 1812 which few know, but important to the outcome, the attitude, and the history of the war.

Fair Winds,
Old Salt
Posted by Maritime Maunder at 7:35 AM