16 June 2019: Happy Fathers' Day to those of you to whom it applies... We at Maritime Maunder almost took the day off, but found a few moments to bring you this interesting piece on what is top candidate for the scariest water in the world - and any who have sailed in the Southern Ocean will likely agree with me. And while we don't generally offer book reviews, this one might be worth your while:
~~~~~~~~~~~~~~


‘Below the Forties there is no law, and below the Fifties there is no God.’ Most sailors know some version of this saying, referring to the dangerous waters more than 40º south of the equator.
In Wild Sea, Joy McCann focuses on these waters with a history of the Southern Ocean. The ocean surrounds Antarctica, its northern bound still open to dispute. In the 1928 first edition of Limits of Oceans and Seas, the Southern Ocean was delineated by land-based limits: Antarctica to the south, and South America, Africa, Australia and Broughton Island, New Zealand to the north.


More recently, cartographers have tried to limit its scope. UK officials take the position that the Southern Ocean starts at 55º S, while their Australian counterparts still measure the limits of the ocean by its contact with land masses, meaning that it reaches up to the southern coasts of Australia and South America.

When even defining the ocean is difficult, it proves an elusive subject of study. The Southern Ocean is one we don’t often think about: it has no famous ports and its cultural influence is diffuse. Some don’t even realise it has an identity. (I mentioned it to one friend and he thought immediately of Tahiti. That would be the South Seas.)

But as an ocean it certainly has its characteristics. As the nautical saying suggests, much of this is rough water. For a vessel heading south, rogue icebergs start appearing at 60º S. 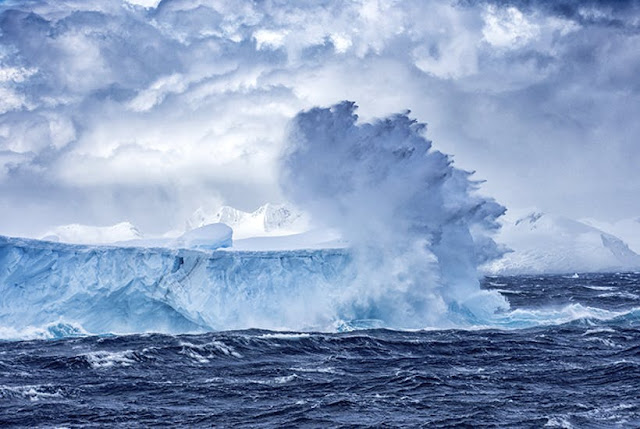 The cold gales and ocean currents can make even the most experienced sailor wary. But the risk carries a payoff in speed.

This is thanks to the world’s longest ocean current: the Antarctic circum-polar current, which speeds along from west to east with no land masses in the way to slow or divert it. In the 19th century it was discovered that for ships travelling from Europe to Australasia the quickest route was to head south after passing the Cape of Good Hope and be carried along by the current and high winds of the Southern Ocean.

It’s a strategy still used by round-the-world yacht racers. But heading so far from any land or hope of rescue is extremely risky. The Southern Ocean is littered with wrecks. It contains the oceanic pole of inaccessbility (at 48°52.6 S 123°23.6 W), the point on the globe farthest from any land — more than 1,400 nautical miles. That means days of sailing for any rescue vessel, although now that few of us travel by ship it’s easy to forget the scale involved. Readers may remember Tony Bullimore’s miraculous rescue from his capsized yacht, at 52°S 100°E: the remoteness of the Southern Ocean is real, even given today’s satellite mapping and communications.

McCann is an environmental historian and her focus is our growing knowledge of the ocean and its incorporation into our understanding of the world. The first tentative European explorations of the Southern Ocean were made in the hope of finding another great continent (not Antarctica). Circumnavigators dipped into it while working their way round Tierra del Fuego. It was the furthest ocean from Europe, and the last to be charted.
~~~~~~~~~~~~~~~~

While I have not personally sailed in those latitudes, I have been there (and around Cape Horn) on a small ship and recall quite clearly the captain's explanation for the constant wind and huge rolling seas: there is simply nothing to stop either. No land exists in those latitudes, only the sea. An interesting and thought provoking statement.

Until next time,
Fair Winds (not those of the Roaring Forties!)
Old Salt

Posted by Maritime Maunder at 1:09 PM